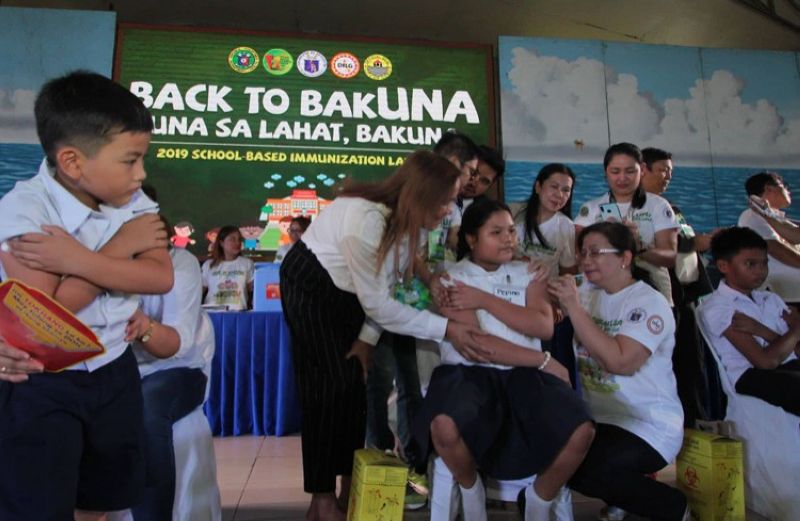 EVEN with the misinformation affecting the immunization campaign, the Department of Health (DOH) 7 wants to immunize around 195,400 public elementary school students this school year.

The school-based immunization will be administered on Grades 1 to 7 pupils.

“Sadly, from 90 percent, we were only at 61 percent nationwide immunization coverage in 2018. It did not even reach the average of 70 percent. The root problem is dis- and misinformation. The Dengvaxia scare is still a big challenge,” he said, adding that they are addressing the issue through an aggressive health education drive.

Dr. Faith Alberto of the DOH’s Health Promotion and Communication Services, said the lack of time of some parents to have their children immunized also contributes to the low vaccination coverage.

The school-based immunization, which became a yearly activity since 2015, serves as a catch-up opportunity for children who missed their scheduled immunization during their infancy.

Bernadas said the free immunization program is one of their strategies to convince parents to get their children vaccinated for protection against vaccine-preventable childhood diseases.

The vaccination is purely voluntary. Only students with parental consent will be vaccinated after a quick health assessment and evaluation of their immunization status.

They will be given measles, mumps and rubella vaccines, and tetanus and diptheria booster shots.

Female students aged nine to 14 will also be given human papillomavirus vaccine that will protect them from cervical cancer.

Maricel Basconillo, a mother of Grade 1 and 2 pupils, said she initially had doubts about the vaccination. But she said she was later convinced to have her children vaccinated because of the protection it will give them.

“I hesitated but in the end, with faith and trust, I had my children vaccinated with measles vaccines last February,” she said.

The school nurse, assisted by the barangay health center personnel, will administer the vaccines in the school clinics.

Bernadas said they also plan to bring the free vaccination program to private schools but they still have to discuss the matter with the school administrators. (WBS)