After Negros killings, Duterte hints of doing 'something drastic' 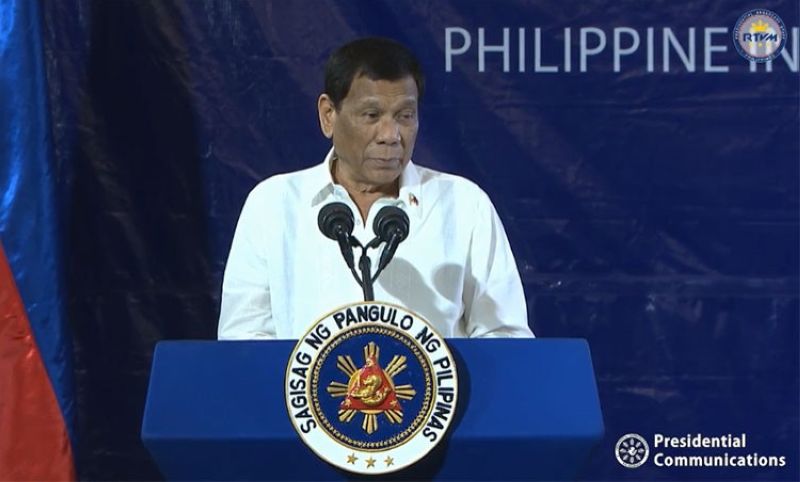 MANILA. President Rodrigo Duterte graces the 28th Founding Anniversary of the Bureau of Fire Protection and 118th Year of Fire Service in a ceremony at the Philippine International Convention Center in Pasay City Thursday, August 1, 2019. (Screenshot from RTVM video)

FOLLOWING the series of killings in Negros Oriental, President Rodrigo Duterte cautioned on Thursday, August 1, that he would be compelled to do "something drastic" to maintain peace and order in the country.

"You have to help in the maintenance of the law and order. Do not limit yourself diyan sa ano (with what you are bound to do)," the President said in a speech delivered in Pasay City.

"Kulang nga tayo ng tao (We lack manpower). I will explain in the coming days. But I'm about to do something drastic. It will not sit well with everybody, maybe including you, but it is needed," he added.

Duterte made the remark, just hours after Presidential Spokesperson Salvador Panelo said the President may "soon" use his emergency powers, such as the declaration of martial rule in Negros Oriental, in an effort to thwart the continuing violence in the province in Central Visayas.

Under Section 18, Article 7 of the 1987 Constitution, a president can declare martial law and suspend writ of habeas corpus for a period not exceeding 60 days, in case of invasion or rebellion.

The idea of possible implementation of martial law in Negros Oriental was raised amid the ongoing military rule in Mindanao due to growing threats from terror groups in the strife-torn region.

Panelo also floated the possibility after some 17 people have been killed in different areas in Negros Oriental in just a span of one week since July 23.

The areas in Negros Oriental where the 17 individuals, including four police officers, were killed are believed to be infested with members of communists New People's Army (NPA).

Some 300 commandos from the police's elite Special Action Force (SAF) have already been sent to Negros Oriental to prevent further killings in the province.

Duterte, in his latest speech, said the spate of killings in Negros Oriental was unacceptable.

He then reiterated his directive to the police and the military to "kill" the enemies of the state.

"You are not limited to just fire. You have to go around and help the policeman and the military. Isang senyas lang naman kayo, magkakaalaman na kayo (You'll know if that's a policeman or a soldier through sign language). You must help. And you must help kill the enemy kasi ang enemy ninyo papatayin talaga kayo (because the enemy will really kill you)," he said.

"So I'm warning everybody, including the Sparrows, na the Angels, ang tawag ko sa Sparrow ko, will also be looking for you. Ganoon ang ano, ang mga anghel ng gobyerno. Hindi pwede iyan," he added, referring to the Sparrow unit, an urban hit squad of the NPA.

(So I'm warning everybody, including the Sparrows, that the Angels, who are my Sparrows, will also be looking for you. That's how it is. They are the angels of my government. I will not tolerate violence.) (SunStar Philippines)