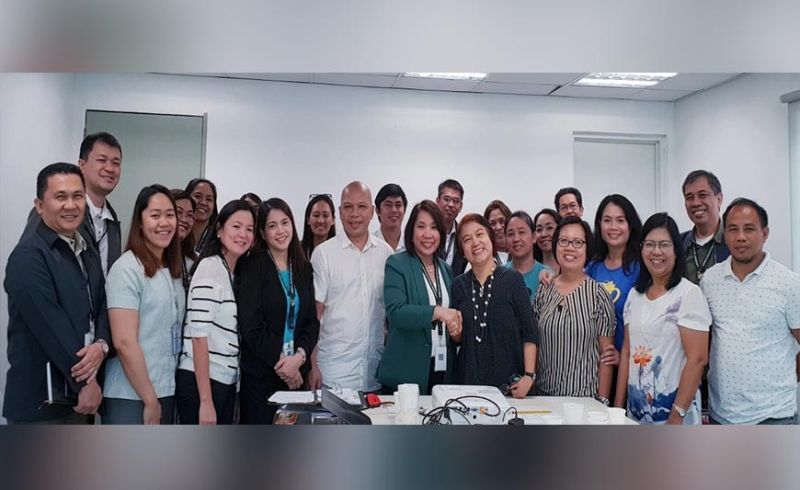 BACOLOD. Officials and representatives of the Land Bank of the Philippines (LBP) and Philippine Crop Insurance Corp. with the personnel of the Office of the Provincial Agriculturist during the coordination meeting held at LBP-Gatuslao Office in Bacolod City earlier this week. (Contributed Photo)

THE Provincial Government of Negros Occidental, through the Office of the Provincial Agriculturist (OPA), is stepping up its collaboration efforts with the Land Bank of the Philippines (LBP) and Philippine Crop Insurance Corp. (PCIC) to benefit more farmers in the province.

OPA personnel sat down with officials and representatives of LBP-Negros Occidental Lending Center and PCIC Provincial Extension Office in a coordination meeting held at LBP-Gatuslao Office in Bacolod City earlier this week.

Dina Genzola, provincial supervising agriculturist, said the meeting was aimed at strengthening the support system and linkages in order to reach out and assist more marginal farmers in the province.

Among the programs offered by the LBP include the Agricultural Competitiveness Enhancement Fund (ACEF), a lending program that aims to improve the sustainability of small farmers and fisherfolk with the lowest interest rate of two percent per annum.

Genzola said more marginalized farmers and fisherfolk in the province can also avail other agricultural programs and extension services from the LBP as well as the PCIC in boosting their yield and income.

The PCIC is an active partner of the provincial government in ensuring the crops of local farmers and fisherfolk.

Through the Negros First Universal Crop Insurance Program (NFUCIP), for instance, the agency provides indemnity claims to enrolled farmers during crop production losses due to calamities, pest infestation and diseases.

It can be recalled that President Rodrigo Duterte, in his fourth State of the Nation Address (Sona), ordered to the LBP to be aggressive in helping local cooperatives.

Duterte said “You know, you are called Land Bank but you are now the number one commercial bank in the Philippines.”

“Land Bank should go back to land. Why are you mired in so many commercial transactions? Bumalik kayo where you were created for and that is to help the farmers,” he said.

The President gave the LBP until the end of July to give him a plan or else he will ask Congress to reconfigure it.

“If there is no viable plan for the farmers and it is just all commercial transactions, might as well abolish it and give the money to the congressmen for their development funds,” he added.

For his part, Provincial Agriculturist Japhet Masculino earlier said they are upbeat that the government-own bank will further strengthen its programs in the province following the President’s pronouncement.

Masculino said the LBP in Negros, based on their experience, always tried its best to provide loans to the farmers despite bulk of requirements, which are part of the process.

“We hope that the President’s order will further improve the services of LBP in the province so more farmers will have easy access to it,” he added.