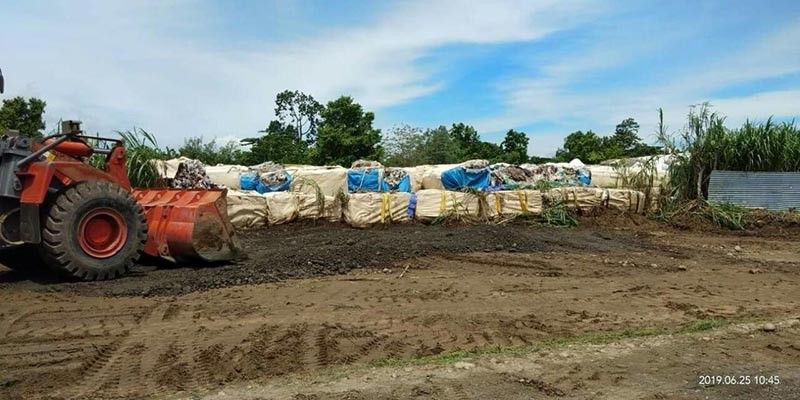 MISAMIS ORIENTAL. The Bureau of Customs in Tagoloan, Misamis Oriental, shows the remaining 5,000 metric tons garbage that are now repackaged and ready to be shipped out this August, back to South Korea. (Photo by Mr. John Simon/BOC)

AN OFFICIAL of Verde Soko Philippines Industrial Corporation allegedly could not go outside the country after his name was under the list of the International Police (Interpol), while an environmental group had written to South Korean president to appeal the immediate return of the remaining trash inside the Mindanao International Container Terminal (MICT) in Tagoloan, Misamis Oriental.

In a statement, Misamis Oriental second district representative Juliette Uy said that a Verde Soko official named Cho Chul-soo, or Charles Cho, had a standing arrest warrant and that his name was under Interpol’s wanted list.

“This Cho Chul-soo has pending cases of falsification of public documents and embezzlement in South Korea. I hope our own Bureau of Immigration is working hard on this case so Mr. Cho is brought to justice,” Uy said in a statement.

Uy added that she was grateful for the independent initiative of environmental group, EcoWaste Coalition, to write to South Korean President Moon Jae-in reminding the latter’s government about its promise to allow the garbage containers to be returned to their country. As agreed in the bilateral meeting between the Philippine government and South Korean government, the target month of return shipment will be in August.

Acting independently, EcoWaste, on August 2, pushed the government of South Korea to act on the 5,177 tons of illegal waste exports that continue to languish in Mindanao for over a year now despite repeated assurances from Seoul to take them back “as soon as possible.”

Through a letter sent to Jae-in, which was copied to Environment Minister Cho Myung-rae and Ambassador Han Dong-man, the group urged the South Korean authorities “to immediately act on the pressing issue and not allow the controversy to drag on like what happened to the infamous garbage from Canada that finally left the Philippines last May 30 after six long years.”

However, Uy’s camp said that a logistics firm and other Verde Soko officials are already cooperating with authorities to repack the remaining 5,000 metric tons garbage and authorities are waiting for schedule of the container ship to be sent to recover the garbage.

“I appreciate the move of the Ecowaste Coalition to write to South Korea’s president. Perhaps EcoWaste were just not updated on the latest developments in South Korea,” Uy said.

Uy also said that the South Korean government had to take care of the important matter of a supplemental budget appropriation to cover the cost of shipping back to South Korea that was imported by by Verde Soko.

“Now that been taken care of, the ship should come fetch the cargo in the coming weeks, this month of August at the soonest,” Uy said.

The said meeting led to an agreement that the trash would be returned with reasonable sharing of expenses between the Philippines and South Korea.

“We urge the South Korean government to undertake immediate re-exportation of their 5,177 tons of illegal bulk waste exports that are still in the Philippines despite the agreement reached at a bilateral meeting between the two governments to have these wastes repatriated to their origin,” said in a statement by Aileen Lucero, National Coordinator, EcoWaste Coalition.

“Over 45 days have lapsed since the said meeting and we see no progress in the re-exportation arrangements for the misdeclared plastic synthetic flakes that arrived in the Mindanao on 21 July 2018. One year has already gone by and the illegal waste shipments are still waiting to be shipped back to South Korea,” she added.