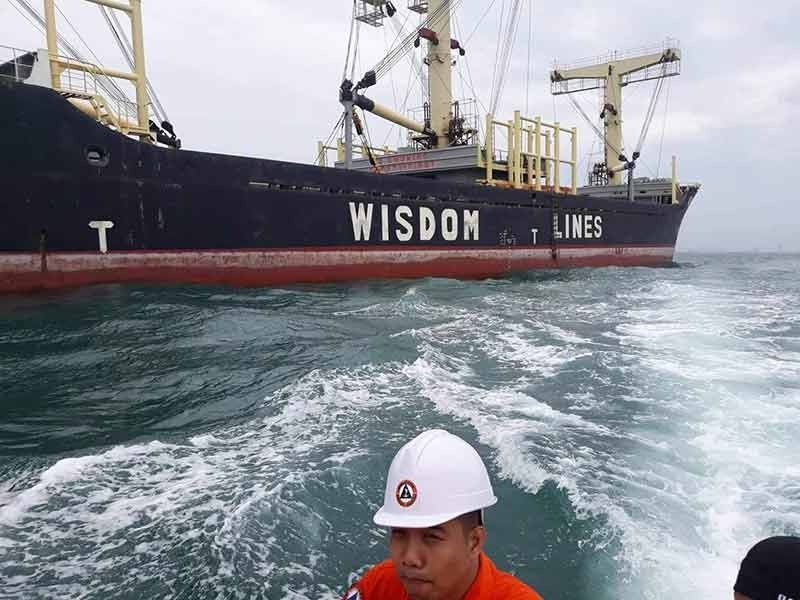 to the rescue. Mv Arikun, a foreign cargo vessel carrying 4,210 tons of wheat and 287, 167 liters of fuel, is towed to an anchorage area in Talisay City after it ran aground in the vicinity of Lauis Ledge. According to Lt. Junior Grade Michael John Encina of the Philippine Coast Guard, no one was hurt by the incident. (Contributed Photo/Philippine Coast Guard)

A FOREIGN cargo vessel ran aground at the vicinity of Lauis Ledge Lighthouse in Talisay City, Cebu Saturday morning, Aug. 3, 2019.

The vessel, which had made a short stop in Davao City, had a crew of 18, mostly from Myanmar, Vietnam and China.

Fortunately, Encina said, none of the crew was hurt and there was no trace of oil spill.

The vessel reportedly ran aground at the portion of the Lauis Ledge that had become shallow because of the low tide. The vessel was towed to a nearby anchorage area in Talisay City around 11 a.m.

Based on an inspection report made by the Port State Control, the vessel had sufficient documents.

However, Encina said they will still issue a deficiency report to the vessel’s skipper. The vessel will also need to undergo an underwater hull inspection before it will be allowed to sail again.

In January 2014, the PCG rescued 170 passengers from a fastcraft that ran aground off Lauis Ledge.

Mv Weesam 7 accidentally struck the seafloor while on its way to the Cebu port terminal from Ormoc City in Leyte.

In August 2013, mv St. Thomas Aquinas, a passenger ferry operated by 2GO Travel, collided with mv Sulpicio Express Site, a cargo ship of the Philippine Span Asia Carrier Corp., in the vicinity of Lauis Ledge, causing it to sink.

As of Sept. 3 that year, the accident had claimed the lives of 108 persons with 29 remaining missing as a result of the accident. (WBS, HBL OF SUPERBALITA CEBU / JKV)