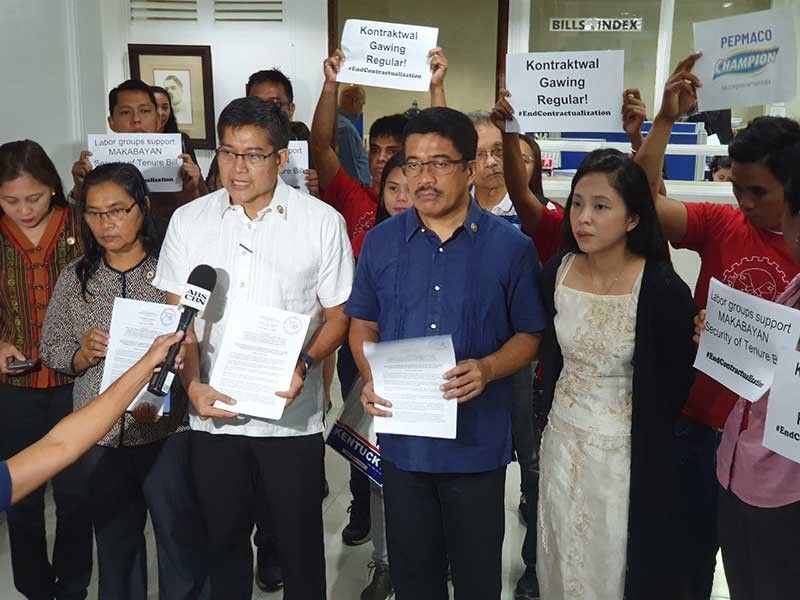 MANILA. Makabayan lawmakers file on August 5, 2019 their own version of a bill seeking to provide security of tenure by declaring all forms of contractualization illegal. (Photo by Ryniel Berlanga)

MEMBERS of the Makabayan bloc at the House of Representatives on Monday, August 5, filed their own version of a Security of Tenure bill, which seeks to declare all forms of contractualization illegal.

The bloc, whose members voted against the Security of Tenure measure in the 17th Congress, said "existing rules and regulations are ineffective in curbing contractualization, and have in fact only further promoted and legitimized contractual employment schemes."

They cited the Department of Labor and Employment Department Order 174-17 issued on March 16, 2017 and Executive Order No 51 signed on May 1, 2018, merely repeated what were provided under previous rules on prohibition of labor-only contracting and allowed job contracting.

Their proposed measure, House Bill 3381, seeks to declare all forms of contractualization as illegal and penalize those who employ the scheme.

HB 3381 is titled "An Act Strengthening the Workers' Right to Security of Tenure." It seeks to amend the Labor Code, or Presidential Decree No. 442.

The Makabayan bloc had voted "No" to House Bill 6908, the lower chamber's version of the Security of Tenure bill which was approved on March 23, 2018.

In its version, the bloc composed of progressive lawmakers criticized President Rodrigo Duterte for vetoing the bill that was approved by both the House and the Senate.

"The veto reflected his (Duterte) true bias and priority of business and capitalists’ interests over and above workers’ rights and welfare," they stated.

They noted that Duterte said “legitimate job contracting should be allowed” and businesses “allowed to determine whether they should outsource certain activities or not”... “regardless of whether this is directly related to their business”.

He said that “sweeping expansion of the definition of labor only contracting destroys the delicate balance” between the interest of labor and management “and will place capital and management at an impossibly difficult predicament”.

"President Duterte must have forgotten that the vetoed bill was workers’ security of tenure bill, not a security of business bill. Contractualization persisted because present laws and regulations allowed job contracting and businesses were able to get around the prohibited labor-only contracting," the Makabayan lawmakers stated.