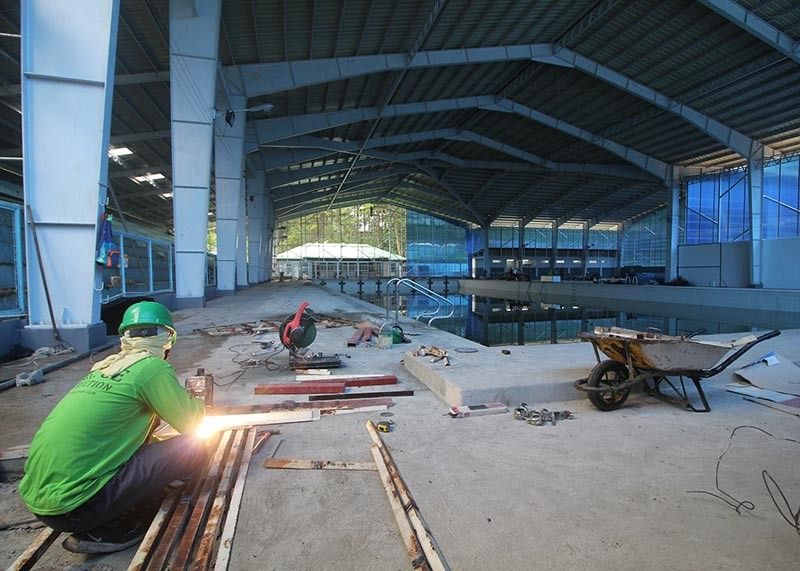 BAGUIO. Workers lay improvements for the P34 million worth upgrade for the Baguio athletic bowl swimming pool which is set to be finished this month. (Jean Nicole Cortes)

Dela Peña said assessment of all businesses at the over one hectare sports facility will be scrutinized, assessed and decided on for the good of the city.

The city official said based on their research, there are no existing agreements between the city and the Philippine Army, the tennis concessionaire as well as the canteen and the pay comfort room operating within the complex.

“There is no Memorandum of Agreement with the city. We have to reclaim what is ours,” Dela Peña said.

Dela Peña said the recommendation of City Sports Coordinator Gaudencio Gonzales on the eviction of the Army Reserve Command under the 14th Regional Community Defense Group, tenants at the Baguio Tennis Club (BTC) and the RnR Sanitary Service will also be evaluated.

“That is his report and we will also conduct our own assessment,” Dela Peña added.

Gonzales, in his report, said the area being occupied by the army reserve has become an avenue for illegal activities such as smoking, drinking, videoke and illegal parking.

It also took notice of the construction of an extension of their quarters and other development projects without approval of the City Building and Architecture Office.

The sports official added while the army reserve command has been given four parking slots for government-owned vehicles, most vehicles parked within their area are privately owned. More than the allowed number of vehicles are also parked in the area.

Dela Peña added a meeting with department heads as well as talks with the establishments in the area is scheduled.