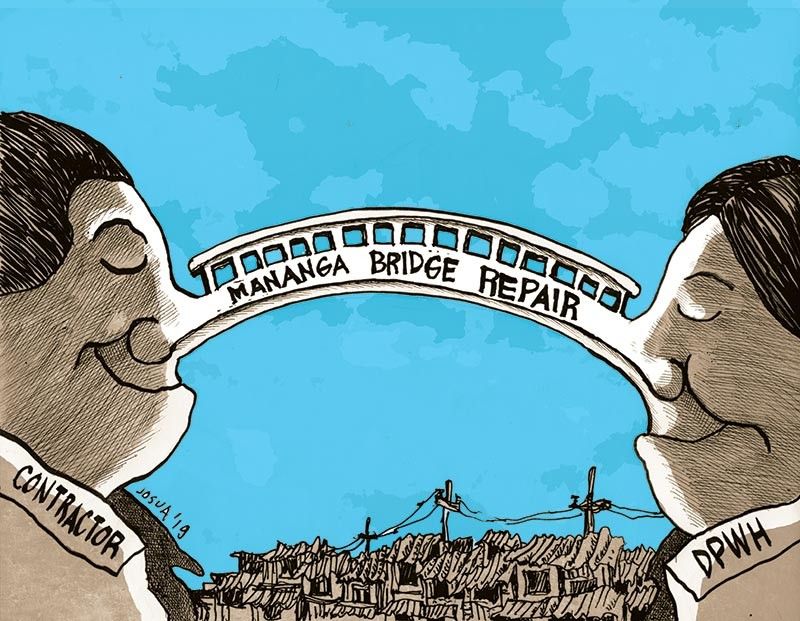 ANYONE who regularly passes through the Mananga Bridge had been pissed off for months now. Not only by the vehicular congestion that one had to deal with everyday, but also by one’s view of the utter lack of movement in the bridge works. Only recently do we see some panicky movement down there.

In the Department of Public Works and Highways project schedule, the northbound lane of the Mananga Bridge was supposed to open last March yet. Unfortunately, and without public explanation, the works didn’t see the light of day. Everyone’s attention turned to the mid-term elections; it appeared that no one was there to hold the DPWH accountable.

Unfortunately for the agency and the project’s contractor, there is now the newly installed Mayor Gerald Anthony “Samsam” Gullas breathing under their neck.

The DPWH’s commitment was Aug. 4, but that turned out to be the agency’s fantasy. On his Facebook post, Gullas said he was “deeply disappointed and embarrassed” to learn that the private firm working on the bridge’s rehabilitation could not meet its completion date.

Reports said that on Aug. 1, when Gullas and his staff visited the site, the contractor could not give a clear answer on the delay.

The mayor met with DPWH officials to discuss the complaints he received about the slow progress of the project. The officials promised they would finish the works on Aug. 4, a week before the Regent Aguila Ironman 70.3 Philippines race on Aug. 10-11. If anything, that promise is an insult to the taxpayers who are the right beneficiaries of the project.

In a report, Gullas said, “Based on our site inspection, all I saw was that they still need to finish the bridge’s railings, asphalt the road, and have it cured for a few days and have it checked for stability and safety. Despite the construction schedule they prepared and showed me during our meeting last month and their promise to open the bridge by Aug. 4, it disappoints me to find out that those promises were not etched in stone,” Gullas said.

But Gullas can definitely etch in stone a rather formal complaint against the DPWH and the firm. Someone has to answer for this delay.