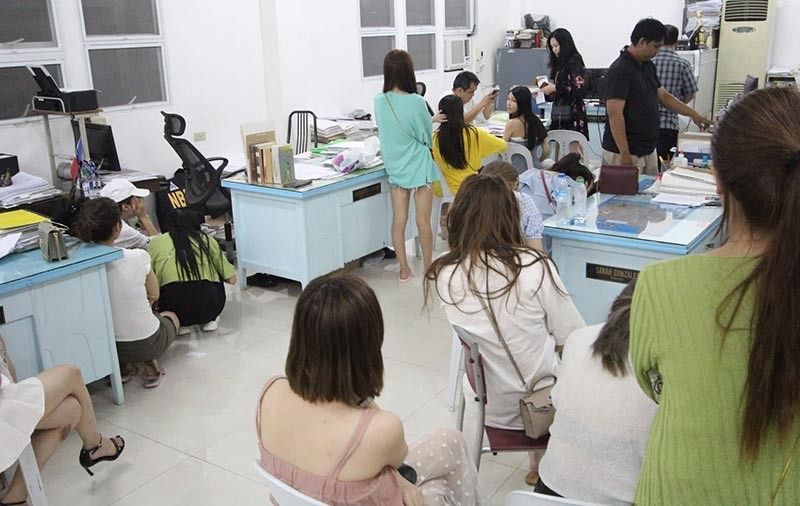 * PRESIDENT'S SPOKESMAN PANELO BEING THE LOOK-ALIKE OF A CHINESE SKATER. Luo Tuo En, 62, a champion skater and professional photographer from Hong Kong, "looks nothing alike," says Salvador Panelo, who is also Duterte's chief legal counsel. Luo's eyes are "big big" and he is "sloe-eyed," said Panelo, "mine are sleek."

* A HIGH ELECTIVE OFFICIAL WHO LOST IN THE LAST ELECTION. Nursing a drink of scotch, he asked his wife, "What went wrong, dear?" "Because you, pompous dumbass, didn't change. You were still a pompous dumbass during the campaign."

Not just in construction

Many of us thought the Chinese nationals competed with Filipino laborers only on construction and online gambling.

Workers from China, reports said, have descended on many parts of the country, including Cebu, to fill jobs in construction and internet gaming.

The arrest Friday (August 2) of four Chinese women and 34 of their compatriots, all women, for suspected sex trade added a dimension to the now-long-running story of Chinese "invasion" in the local labor market.

They're competing in the flesh trade too.

The 34 Chinese nationals worked as GROs, guest relation officers, euphemism for prostitutes, at a KTV bar in a hotel compound in Agus, Lapu-Lapu City. They were "rescued," possibly a euphemism too, if they had signed up for the work knowing what they were getting into or had the chance to complain but didn't.

Their four managers were charged with violation of the trafficking-in persons-law while the "rescued" persons were turned over to the local Chinese consulate.

Apparently, the Chinese women involved were brought into the country under the Legalized Online Gaming Operation (Logo) program, which the government has opened also for Chinese entrepreneurs.

* The Chinese nationals were supposed to be online gaming workers, allowed entry under that condition, but actually worked as sexual workers. There was therefore a serious breach of conditions in their stay, in effect an act of illegal smuggling of people.

* Should the "rescued" Chinese nationals not have been detained by Filipino immigration authorities, for the bureau to investigate and determine if they should be deported? The Chinese consulate may only see that they're humanely treated and later arrange for their return trip.

Media news stories still have to take up that aspect of the incident.

During Pastor Apollo Quiboloy's TV program last Friday (August 2), he announced that President Duterte's daughter, Davao City Mayor Sara Duterte-Carpio, "has already been chosen by God to follow in the footsteps of her father." In short, she will succeed him as president of the country.

Cebu Capitol's special guest for the 450th anniversary of the province Tuesday (August 6) was thus no ordinary person. By the prediction of the founder of Kingdom of Jesus Christ church, Inday Sara will "follow God's big plan for her." She could be the next president.