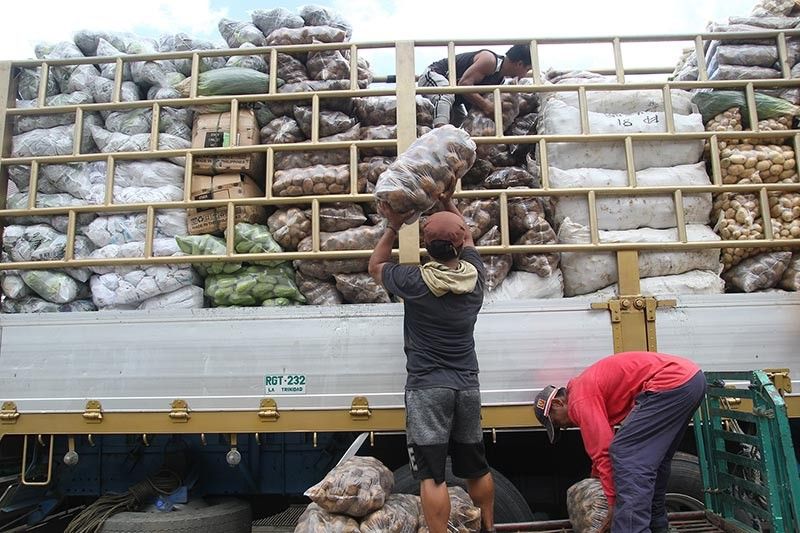 BENGUET. Porters load a variety of vegetables from the Benguet Agri-Pinoy Trading Center (BAPTC) to be delivered in various market outlets in the country. (Photo by Jean Nicole Cortes)

BENGUET remains the top producer of temperate vegetables in the country, as P200 million worth of vegetables were already sold at the Benguet Agri-Pinoy Trading Center (BAPTC) since 2015.

Violeta Salda, BAPTC chief of operations, said the P656-million facility serves as center of trading, inter-trading and socio-economic enterprise for semi-temperate crops have incurred increasing trading growth in the past years.

In the first five months of 2019, vegetables traded at BAPTC decline brought by the damages of Habagat and typhoons Ompong and Rosita last year.

Salda said they are looking at less than 20 percent in terms of volume.

Cameron Odsey, Department of Agriculture Cordillera (DA-CAR) executive director, said BAPTC, which was funded by the agency for the production and marketing of quality highland vegetables was turned-over to the Benguet State University and La Trinidad to manage and operate in partnership with local farmer’s cooperatives.

Odsey added production of fresh semi-temperate vegetables remain as main source of livelihood for farmers in the highlands particularly in the northernmost towns of Mankayan, Kibungan, Buguias, Bakun and Atok, all in Benguet.

Other provinces in the Cordillera Administrative Region also trades vegetables in BAPTC which includes eight towns from Mt. Province and Tinoc in Ifugao.

Bulk of the vegetables are traded in the different markets of the National Capital Region. From January to December last year, Divisoria rank first with 68,782,571 kilograms traded followed by Balintawak, and Urdaneta in Pangasinan.

Odsey meanwhile said the region must respond to the current challenges of the vegetable industry.

“For the highland vegetable industry, the challenge is basically on sustainable and excellent production of vegetables,” Odsey said.

Odsey added DA’s program is invested on easy access of vegetables which include farm to market roads, footpaths, and foot bridges.

She said they are also seeking funding for the repair of five cold storage rooms.

To date, Baptc has 12 cold and 10 dry storage facilities.

She continued one cold storage can accommodate 28 tons of different commodities and store perishable vegetables.

“At least if there are typhoons in two weeks’ time, by now we can already store. Farmers have institutional buyers and they can store vegetables it a week or two,” she added.

Stakeholders are urged to form groups to afford the corresponding rental fee of P250 per square meters.

She added the goal for BAPTC is to become a center of excellence in trading and marketing quality semi-temperate crops.