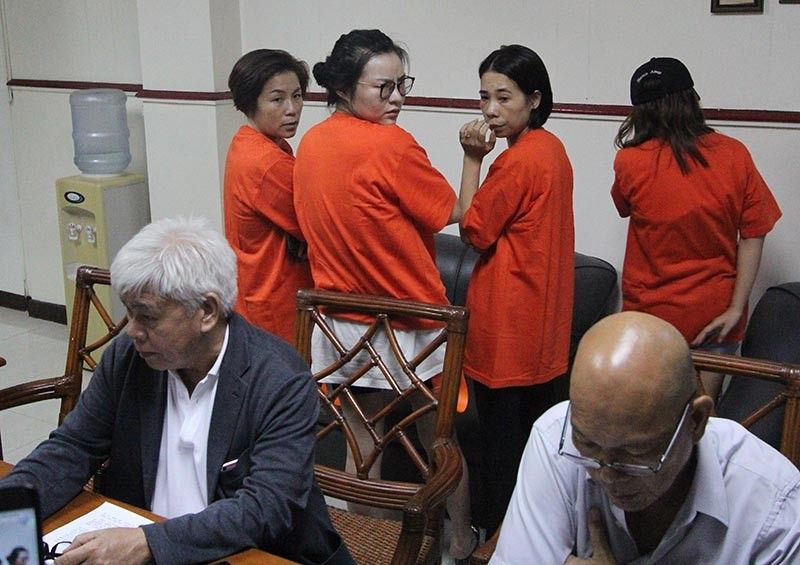 SYNDICATE? A language barrier kept National Bureau of Investigation (NBI) officials from talking to the Chinese nationals who were arrested on Friday, Aug. 2, 2019. With the help of the Chinese consul, the NBI hopes the suspects can be investigated by the Chinese police. (SunStar photo / Amper Campaña)

THE National Bureau of Investigation Central Visayas (NBI-Cevro) wants the Chinese police to conduct its own investigation on the operation of a sex trafficking group in Cebu, where both the alleged perpetrators and victims are Chinese nationals.

The NBI-Cevro uncovered the operations in a bar at the Tourist Garden Hotel in Sitio Ibabao in Barangay Agus, Lapu-Lapu City, which led to the rescue of 34 Chinese women. The hotel reportedly operates exclusively for Chinese patrons.

On Friday, Aug. 2, 2019, NBI Cevro Regional Director Tomas Enrile said an entrapment operation was conducted against Zeng Dan, Quan Yiqing, Xiuzhu Wei and Xiushen Wei inside the Royal One KTV located within the compound of Tourist Garden Hotel. The women who were allegedly trafficked were also found there.

“They were recruited from China and were promised a job in a legal gaming operation for a Philippine offshore gaming operator, but they ended up in Cebu as high-class prostitutes,” Enrile said.

Enrile said investigators had to deal with the language barrier since the suspects and the victims do not speak English.

He said they are coordinating with the consul to ask their Chinese counterparts to conduct an investigation.

The women, aged 20 to 30 years old, came from different provinces in China and entered the Philippines with a tourist visa.

Based on the NBI’s investigation, the women catered solely to Chinese patrons traveling and working in the country.

Since the Tourist Garden Hotel is operating legally, Lapu-Lapu City Mayor Junard Chan said there is no reason for the City to shut it down.

It has all the required permits and licenses to operate as a hotel, beer retailer, liquor retailer and restaurant with salon and spa services and videoke, the mayor said.

Enrile said the operation stemmed from intelligence reports of activities of suspicious persons in the establishment.

The operatives also learned that other Chinese nationals were involved in the operation of the establishment as managers, supervisors and pimps.

The arrested persons were accused of consummating a transaction with a poseur agent who paid P35,000 as bar fine in exchange for sex with one of the women.

Aside from the bar fine, customers are charged P6,000 for the use of an exclusive VIP room for sing-along and P7,500 for each girl entertaining a partner customer.

On Aug. 5, Monday, the four arrested persons were charged and presented for inquest before the Lapu-Lapu City Prosecutor’s Office for the violation of Republic Act 9208 or the Anti-Trafficking in Persons Act in relation to RA 10364.

Four other persons identified as Lingyuan Huang, Xiabing Lin, Zhang Yue, and Li Ping were recommended to be charged with the same violation for regular filing.

The rescued women were released to the care and custody of the Chinese consulate.

On Tuesday, Aug. 6, Chan personally inspected the hotel and saw the business permit issued to Zhao Long on Jan. 23, 2019.

Chan said he does not see any reason for the closure of the business establishment despite the arrest of four Chinese nationals who allegedly sold the Chinese women for sex.

“We don’t know what exactly happened. The matter is now with the NBI, and it’s already being investigated. But in terms of permits, their permits are complete and everything is in order,” Chan told reporters.

For her part, Lapu-Lapu City Rep. Paz Radaza lauded the NBI for the operation.

“We have been working hard against human trafficking in line with our efforts in improving the tourism and other industries in our City,” she said. (From FVQ of SuperBalita Cebu, JOB, LRC)