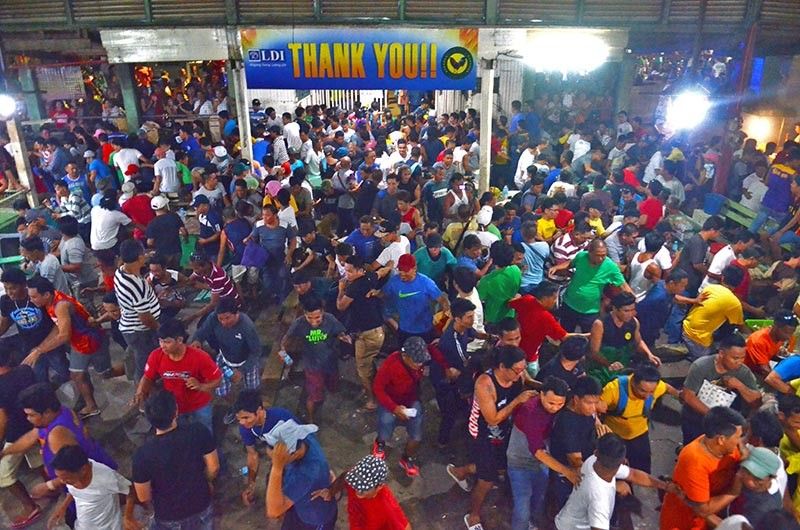 CHAOS AT THE COCKPIT. Sabongeros scramble inside the D&C Coliseum in Mandaue City, where illegal cockfighting was being held, when law enforcers arrived Monday, Aug. 5, 2019. (SunStar photo / Alan Tangcawan)

A MANDAUE City Hall official was seen distributing food and water to the sabongeros or cockfighters apprehended Monday inside a cockpit owned by Mayor Jonas Cortes and his family.

City Administrator Jamaal James Calipayan went to the offices of the Criminal Investigation and Detection Group (CIDG) 7 at Camp Sotero Cabahug on Gorordo Ave., Cebu City on Tuesday, Aug. 6, 2019, a holiday, again to distribute food to the 370 sabongeros.

The sabongeros, all men, were at the D&C Coliseum Monday night to engage in cockfighting.

To their astonishment, a team from the CIDG 7 swooped down on them and locked down D&C Coliseum, located in Barangay Ibabao-Estancia.

The CIDG 7 had acted on a tip that illegal cockfighting was going on at D&C Coliseum Monday.

D&C Coliseum had no permit to hold cockfights that day, but people in the neighborhood and tricycle drivers said cockfighting was held there almost every day.

Some of the masyadors also said Mayor Cortes owns the cockpit.

Both SunStar Cebu and Superbalita Cebu tried to reach Cortes for comment, but he did not reply to the text messages and calls.

His trusted man, City Administrator Calipayan, said, the D&C Coliseum is indeed owned by the Cortes family, but Jonas had divested himself of any responsibility in the cockpit operation when he became mayor.

D&C Coliseum was part of the inheritance from their mother, who died in 2009.

The mayor left it to his siblings to run D&C Coliseum, Calipayan said.

Calipayan also said the cockpit has a license to operate and hold cockfights three times a week.

About 370 sabongeros spent the no-work holiday inside Camp Sotero, complaining of being hungry and without sanitary means.

Calipayan said he had portalets delivered to Camp Sotero since most of the sabongeros apprehended are Mandaue City constituents.

The number was higher Monday night, but the CIDG team let go of the senior citizens, the disabled and those they deemed better off not locked up.

Calipayan personally gave out bread Monday night and lunch packs from a fastfood chain Tuesday noon to the sabongeros.

He refused to answer questions from reporters who covered the apprehension. He issued a statement by text message later on Tuesday afternoon.

He said the food he distributed did not come from City Hall but from the management of D&C Coliseum.

Some of the sabongeros and masyadors said, however, they were told that the food came from City Hall.

One of the delivery boys said the food came from Mandaue City Hall.

The apprehended sabongeros, numbering close to 400, were taken to Camp Sotero Cabahug where CIDG 7 holds office.

Because of their sheer number, they could not all fit in the CIDG stockade. They were placed on the open grounds of Camp Sotero. The main gates had to be locked.

The volume of apprehension is unprecedented.

Arrests are usually done in a tigbakay, or the illegal cockfighting carried out in the neighborhood.

CIDG 7 Chief P/Maj. Edwin Lacostales, who led the raid, said charges of violation of Presidential Decree 449 or the Cockfighting Law will be lodged against the apprehended sabongeros.

Lacostales also said his men are looking into the ownership of D&C Coliseum. (AYB & FMD of SuperBalita Cebu, MPS)