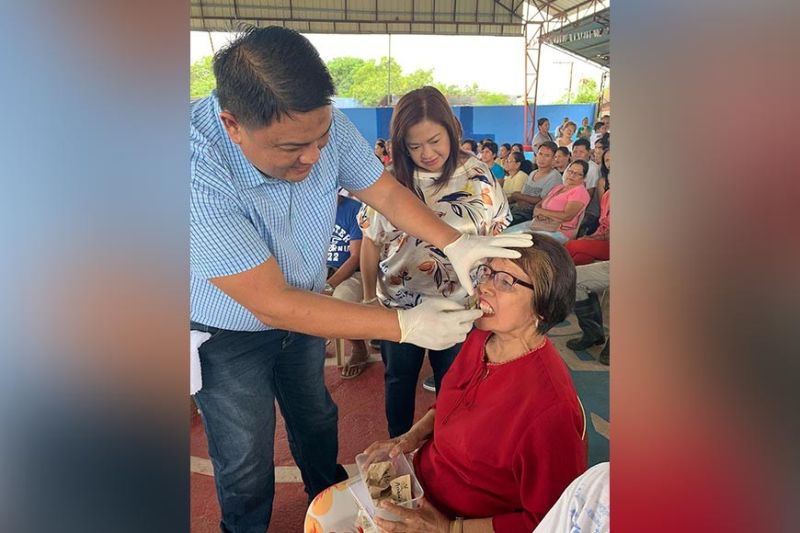 Lubao Mayor Esmeralda “Esmie” G. Pineda personally witnessed the dentures-fitting and distribution of eyeglasses to about 250 residents of Barangays Baruya, San Isidro and Calangain at the latter barangay’s covered court.

The elder Pineda, known to many as “Tatay”, tapped the services of dentist, Dr. Alfie Bonifacio and ophthalmologist, Dr. Emerson Tan, in the project that would tour barangays of town and nearby municipalities of Sasmuan, Sta. Rita, Guagua, Porac and Floridablanca.

Many residents, among them spouses Lorenzo del Rosario, 71, and Aurora, 68, of Barangay Baruya, were given full dentures that could cost from P15,000 to P20,000 and eyeglasses that can be custom-made for an average of P2,000.

Lorenzo lost most of his teeth a decade ago and had endured having to eat only on soft diet. He has also left a job as driver due to poor eyesight.

Yesterday, Lorenzo received his set of full dentures and said that he can now have his favorite pork adobo which he had been raring to eat for a long time.

Mayor Pineda said she requested for the barangays of Lubao to be given priority in the project since their family hails from this town.

Aside from the free eyeglasses and dentures, the doctors also performed tooth extraction and pterygium removal which is estimated to cost an average of P15,000.