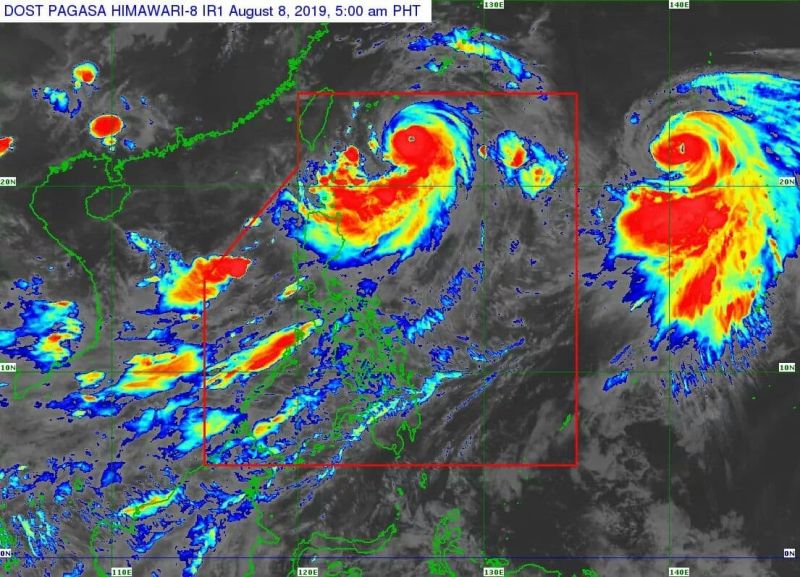 As of 10 a.m. Thursday, the eye of the typhoon was located at 490 kilometers northeast of Basco, Batanes with maximum sustained winds of 185 kilometers per hour (kph) near the center and gusts of up to 230 kph.

The Philippine Atmospheric, Geophysical and Astronomical Services Administration (Pagasa) said Hanna is moving northwest at 15 kph and is expected to exit the Philippine area of responsibility by Friday morning, August 9.

Pagasa said Hanna remains less likely to make landfall on any part of the country, but it will continue to enhance the southwest monsoon, which will bring occasional gusty conditions over the western sections of Luzon and Visayas.

The LPA, as of 10 a.m. Thursday, was located at 180 kilometers west northwest of Dagupan City. This weather disturbance, however, remains less likely to develop into a tropical depression and is expected to dissipate within 24 to 48 hours, said Pagasa.

Typhoon Krosa, on the other hand, was located at 1,930 kilometers east of extreme northern Luzon (outside the Philippine area of responsibility) as of 10 a.m. Thursday.

Pagasa said Krosa was packing maximum winds of 130 kph near the center and gusts of up to 160 kph.

"It is moving northwest slowly and is not expected to enter the PAR," added Pagasa.

These weather disturbances may enhance the southwest monsoon, which will bring rains over areas in the country.

The outer rainbands of Hanna will bring moderate to heavy rains and gusty winds over Batanes and Babuyan Group of Islands today and Friday, August 9, said Pagasa.

Light to moderate with at times heavy monsoon rains will prevail over Ilocos Region, Cordillera Administrative Region, and the rest of Central Luzon, Calabarzon, Mimaropa and Western Visayas.

The weather bureau advised residents in the aforementioned areas, especially those living in areas identified to be highly or very highly susceptible to floods and rain-induced landslides, to take precautionary measures and coordinate with local disaster risk reduction and management offices.

It also warned that sea travel is risky over the seaboards of areas under TCWS Number 1, the seaboards of Luzon and Visayas, and the northern and eastern seaboards of Mindanao due to potentially rough sea conditions. (LMY/SunStar Philippines)