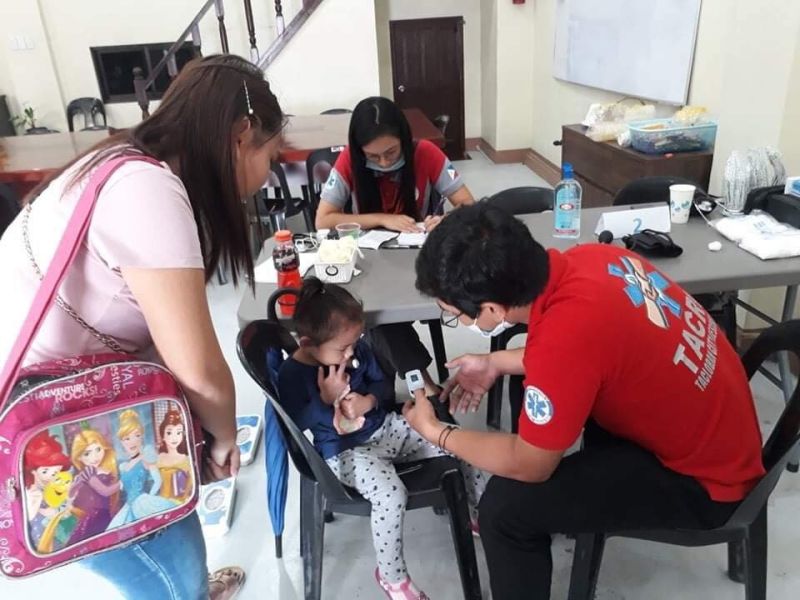 TACLOBAN. A parent brings her child for a free dengue rapid test at the Tingog party-list headquarters in Tacloban City. (Contributed photo)

A PARTY-LIST lawmaker called on health officials on Thursday, August 8, to come up with a “comprehensive dengue outbreak response plan” after the mosquito-borne disease infected 146,062 people since January up to July 20.

“What we have right now is a public health emergency. What we need is an emergency response that involves integrated action from the national level down to barangay level,” said Tingog party-list Representative Yedda Romualdez.

Romualdez, who came from Tacloban City, which is now under “state of calamity” due to rising dengue cases, said they are coordinating with health officials in Eastern Visayas “to map out plans on how to prevent the dengue outbreak in the region from turning into a full-blown epidemic.”

“I am thankful that the Department of Health (DOH) officials on the ground are doing their homework. With their help, we are trying to adopt a comprehensive response for the dengue outbreak,” said Romualdez.

“But for a comprehensive response to work, we need an integrated framework that includes management of clinical care, epidemiological, laboratory and vector surveillance, and risk communication. This requires guidance from the national level,” added Romualdez in a statement.

On Thursday, August 8, Tingog, along with the City Government of Tacloban, has provided free dengue rapid test kits for early detection of the disease.

A bloodletting activity was also held at Tingog Community Center in Tacloban in partnership with the Philippine Red Cross and Tacloban Rescue Unit (Tacru) “to make sure that blood is available to those who need transfusion.”

“Dengue tests in private clinics cost more than P1,000 and this is too prohibitive for our less fortunate provincemates. We need more test kits on the ground as early detection is important for management of dengue cases,” said Romualdez.

The dengue rapid test may be used within five days at the onset of fever and other symptoms of dengue infection.

“The results can be obtained 15 minutes after the test is administered,” added Romualdez, who is also a registered nurse.

“The aim of the mosquito fogging operations is to kill, or ‘knock-down’ any adult dengue mosquitoes that may be carrying the dengue virus,” said Romualdez.

At least three (Leyte, Eastern Samar, and Samar) of the six provinces in Eastern Visayas have declared a state of calamity due to the surge of dengue cases.

“It is important that a national epidemic be declared in these areas to identify where a localized response is needed, and to enable the local government units to use their Quick Response Fund to address the epidemic situation,” said DOH Secretary Francisco Duque III after he declared a “national dengue epidemic” on August 6.

Duque said the number of dengue cases for the past seven months is 98 percent higher than those recorded in the same period in 2018.

In Samar alone, the Provincial Government declared August 9 a “special non-working holiday” for all the government employees and residents to hold a synchronized clean-up drive against dengue.

“Sometimes, when a situation arises so often, like dengue recurring every y

ear, some people take it for granted. This year, it's different. The situation is alarming, and it is time for community action. To quote Councilor Gerry Penserga, a doctor, it's time to be afraid because this is a problem that will get worse next year if we don't get our acts together now,” Marcos said.

Duque, who visited Tacloban on Thursday, August 8, urged the public and local officials to conduct simultaneous “4-O’clock Habit para Deng-Get Out,” focusing on search and destroy of mosquito breeding areas.

Meanwhile, Duque said those dengue admissions without warning signs “ought to be managed at the peripheral health care facilities” to control the overcrowding in government-ran hospitals.

“One of the interesting observation I gathered during my visit in Western Visayas was on how effective hydration stations are,” he said.

At the rural health unit, the health workers screened the patients.

“During my visit, there were 60 patients who were hydrated. The good thing about it... many were discharged. This is what you’re going to take a good look at, because I think this is very cost-effective. Because any case that is admitted to a hospital, your cost escalates,” Duque told reporters in Tacloban during his visit to personally monitor the dengue situation in the region.

“The concept of health care delivery network mentality is very important...You tried to farm out. Rural Health Unit should have capacity to provide basic services to those without warning signs,” he said.

According to the World Health Organization (WHO), there is no specific treatment for dengue fever.

In 2017, the National Government suspended the free vaccination of the first dengue vaccine, Dengvaxia, developed by Sanofi Pasteur, after the pharmaceutical company said the vaccine will pose “severe disease” to people who were not yet infected with dengue.

However, more than 800,000 school children already received the Dengvaxia vaccine before the government halted the immunization program, creating a political controversy and “vaccine hesitancy” to Filipinos despite the availability of other safe vaccination services of the government. (SunStar Philippines)