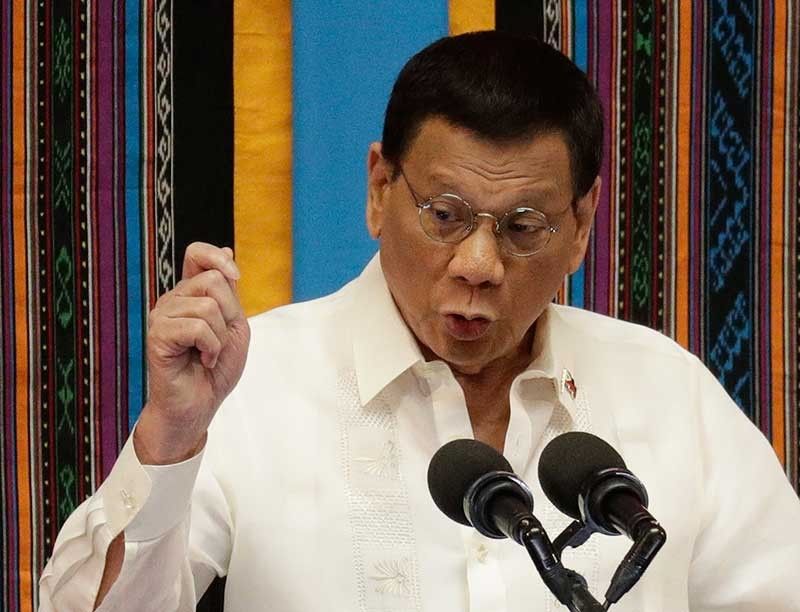 PRESIDENT Rodrigo Duterte on Thursday, August 8, said he is going on another working visit to China to discuss the Hague arbitral ruling that favored the Philippines and the delay in the crafting of a legally binding Code of Conduct in the South China Sea.

"I have about two more years, plus months left. It's about time that we start talking. Panahon na. Ilang buwan nalang ako diyan (It's time. I only have months to do it)," Duterte added.

On July 12, 2016, the Permanent Court of Arbitration based in The Hague ruled in favor of the Philippines's petition and invalidated China's extensive claims to most features of the South China Sea.

Duterte is scheduled to go on a working visit to China later this month.

It will be his fifth trip to China since he assumed as President in 2016 and it will happen about two months after a Chinese vessel wandered into the Philippines' exclusive economic zone and rammed a Filipino fishing boat that had been anchored near Recto Bank in the West Philippine Sea.

The incident outraged many Filipinos as the Chinese left 22 Filipino fishermen at sea. They were rescued by Vietnamese fishermen.

Duterte also said he will bring up the delay in the completion of a legally binding Code of Conduct (COC) in the disputed South China Sea.

"That's why I'm going there. They are delaying it and it's causing so many incidents, and one day, it will... One mistake, a miscalculation there and mahirap nang bawian iyan (it will be difficult for us to address it)," Duterte said.

Sought for clarification as to who could be causing delays in the negotiations for the crafting of COC in South China Sea, Duterte said: "It could be China. Nobody else is asking us to wait."

The Association of Southeast Asian Nations (Asean) and China have been working on establishing a final and binding COC in the South China Sea in an effort to ease the tensions in the hotly-contested waters.

Brunei, Malaysia, Philippines and Vietnam are the four Asean member-states that are claiming parts of the South China Sea. China and Taiwan, meantime, are claiming most of the busy waterway.

If completed, the binding code will maintain peace and stability in the resource-rich South China Sea.

On June 23, Duterte called on the Asean member-states and China to hasten the creation of the COC.

As the country coordinator for Asean-China Dialogue Relations, Duterte reiterated that he would raise the delayed negotiations for the crafting of COC during his Beijing trip.

"We would talk about what's the situation in the China Sea or West Philippine Sea. We'd like to call it... So lahat na 'yung, one is bakit wala pa yung, matagal na, 'yung code of conduct (So one is why there is no code of conduct yet). It's becoming a very big issue," he said.

"I do not want trouble for my country, whether we like it or not. However, in which side you are, it would not be good for my country to be in a state of violence," Duterte added. (SunStar Philippines)