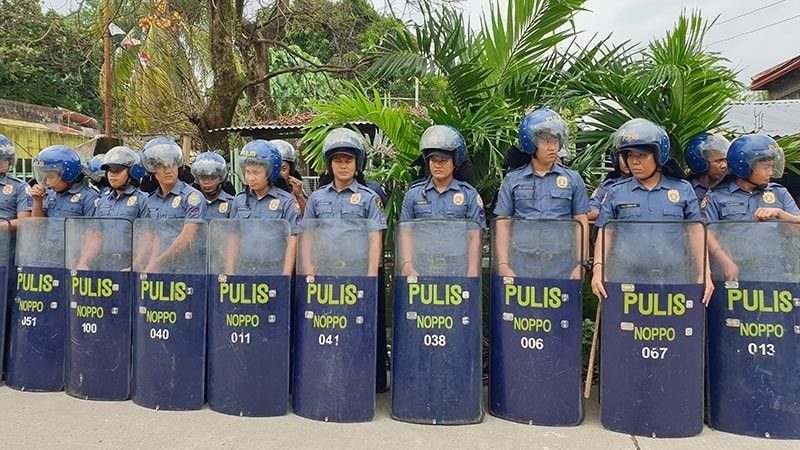 He said that, “in order to prevent any untoward incident as we want to ensure the safety of the security guards, we will not insist on installing them inside. There’s no timeline yet but it depends on the order of the higher headquarters,” he said.

He added, “We have to install the AGNSA security guards. But for the moment, that will be the first step. At least, they are there already but not inside the premises. The policemen will stay there to avoid any untoward incident.”

The AY-76 security guards vacate the premises of the VTI main office and the Ceres Bacolod South Terminal on Lopez Jaena Street.

“We gave them the order to be implemented, the reason why the AGNSA security guards will be staying outside the premise. That’s for the moment. Peace and order is important and we hope that this will end peacefully,” he said.

Members of the local composite (anti-riot) team on their full battle gear positioned themselves outside of the street approaching the gate of the VTI main office.

While there were negotiations being done between the two parties, there was also a mass held inside the premises VTI compound.

Celina Lopez, Emily and Ricardo Yanson, Jr. were the ones who received the order from Sosia Thursday morning in relation to the reinstallation outside the gate of the VTI’s main office.

Meanwhile, Sheila Sison, lawyer of Roy, Ricky and Emily Yanson and Celina Yanson-Lopez, said, the RCSU can install AGNSA but they could only stay until the gate, “as we won’t allow them inside.”

“We are strongly opposing and protesting the order of Supervisory Office for Security and Investigation Agencies (SOSIA) because it is prejudicial to our case pending before the court and an interference to the right of my clients. It’s a matter that falls on the jurisdiction of the court,” she said.

Moreover, Norman Golez, lawyer of Olivia and Leo Rey Yanson and Ginette Yanson-Dumangcas who was also at the site said, “99 percent of the companies will be back to Leo Rey Yanson. He has been in control of the 15 branches and the south terminal and we are hoping to get back the main office.”

Meanwhile, Negros Occidental Governor Eugenio Jose Lacson Thursday urged the camps of Roy and Leo Rey to settle their dispute following the stoppage of operation at the Bacolod South Terminal on Wednesday which has affected thousands of travelers in Southern Negros.

According to Lacson, whatever comment he will give will not help resolve the current squabble between the siblings so he has decided to keep quiet instead and let them resolve it amicably.

However, Lacson said he hopes the court which currently handles the dispute should resolve it urgently as the whole public is starting to get affected.

“If it’s allowable there should be a speedy trial to resolve the issues,” Lacson said.

The governor said even though they have made preparations over such an incident, he admitted they could not cover the amount of buses that come out everyday.

“I’m calling on the family, don’t let this happen again because you assured us from the very beginning,” the governor said. “Please solve your issues amicably,” he added.

The operation of the south terminal has started to operate since yesterday morning.

Jade Seballos, media relations officer of VTI, said that Leo Rey gave a free ride for thousands of passengers who were stranded Wednesday. “Supposed to be, the free ride was only until 12 noon yesterday but Leo Rey decided to continue it until 12 midnight.”

Seballos said hopefully, all the Ceres buses bound for Southern Negros would normally be back to its regular operations because yesterday some of the buses were kept at the compound of Dynamic Builders in Barangay Alijis and some of the bus keys were not yet turned over.

She added that some of the conductors have not returned to their respective works yet as of Thursday.