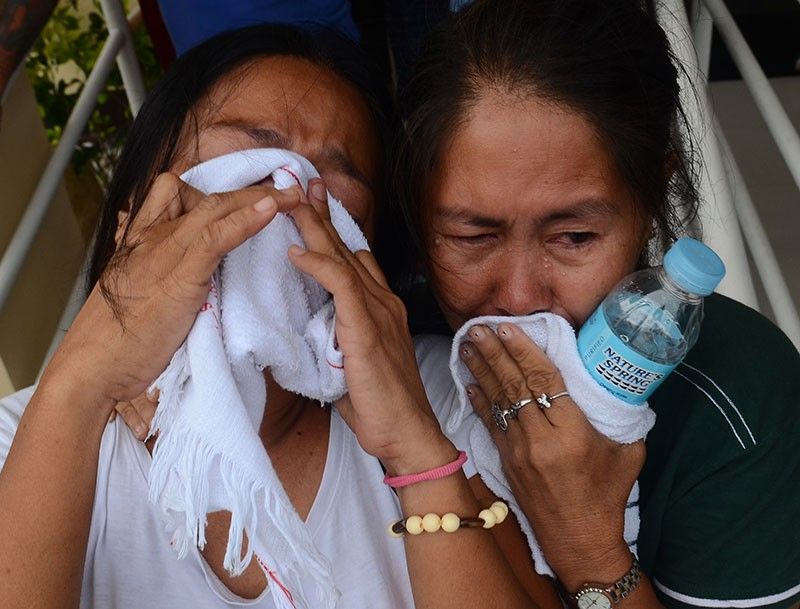 SAD HOMECOMING. The remains of the seven residents of Barangay Ermita, Cebu City who were among those who perished in the sea tragedy in the Iloilo-Guimaras Strait last Aug. 3, 2019 arrive at the Mactan airbase Thursday afternoon, Aug. 8. Cebu City Mayor Edgardo Labella joined bereaved relatives at the airbase. The bodies were brought to Ermita for their respective wakes. (SunStar photo/Alan Tangcawan)

SEVEN Cebuanos who drowned after their motorbanca capsized in the Iloilo-Guimaras Strait on Saturday, Aug. 3, 2019, finally arrived in Cebu past 4 p.m. on Thursday, Aug. 8.

The bodies of Jared and Bernardo Janson and Romnel, Danilyn, Dannelle, Angelina and Romeo Baguio Sr. were flown in via a C-130 transport plane of the Philippine Air Force

The bodies of Romeo Baguio Jr. and his son Jay Arvien were taken to Guimaras Province where Maria Nieves Grandeza, Romeo Jr.’s live-in partner and the mother of Jay Arvien, lives. Their wakes will be held there.

The Baguio family, residents of Barangay Ermita, Cebu City, were traveling to Guimaras from Iloilo City so Romeo Jr. could ask for Grandeza’s hand in marriage when the incident happened.

Grandeza was the group’s lone survivor.

Cebu City Mayor Edgardo Labella and relatives of the victims were at the Mactan airbase to await the bodies’ arrival.

Five of the seven coffins could not be opened since the bodies were in a state of decay. The wake will be held at the Ermita Gym.

Barangay Captain Mark Miral had gone to Iloilo to make the needed arrangements so the bodies could be flown to Cebu immediately.

The Office of the Presidential Assistant for the Visayas, through Secretary Michael Dino, also coordinated with the Office of the Civil Defense Western Visayas and the PAF for the use of the C-130.

Last Wednesday night, Aug. 7, President Rodrigo Duterte went to Iloilo City to condole with the families of the victims. However, bad weather prevented the President from going to Guimaras.

The Office of the President will provide P50,000 as financial assistance to the family of each victim from Cebu.

Labella said the City Government will shoulder the burial expenses.

The mayor recalled the time when he spent 36 hours adrift in the middle of the ocean after the boat he was on sank.

He said passengers are better off holding on to a life ring rather than donning a life jacket, which can sink after taking in water.

He said he will order the strict monitoring of pumpboat operations in Barangays Pasil, Suba and Sawang Calero with the help of police and the Coast Guard to prevent the Iloilo-Guimaras Strait tragedy from happening here in Cebu.

Meanwhile, Jason Janson, the eldest son of Bernardo, one of the nine Cebuanos who perished when their motorbanca sank on its way to Guimaras, said he has no choice but to take on his father’s responsibilities.

“Since I now have my own family, he would constantly remind me to take good care of them. Just as he had to us. Even if he was just a pedicab driver, he was a good father. He did not have any vices and he never laid a hand on us,” Jason said in Cebuano.

The night before the Jansons and the Baguios left for Iloilo, Bernardo told his wife, Marcialisa, to ensure that their family remained intact even if he was gone.

“On Wednesday night, while we were about to sleep, he jokingly said I should not allow my children to be separated from each other. He even said I could find another man should he die and I scolded him for saying that,” she said in Cebuano.

She hopes the City Government can give one of her children a scholarship. (from HBL of Superbalita Cebu/PJB, WBS)