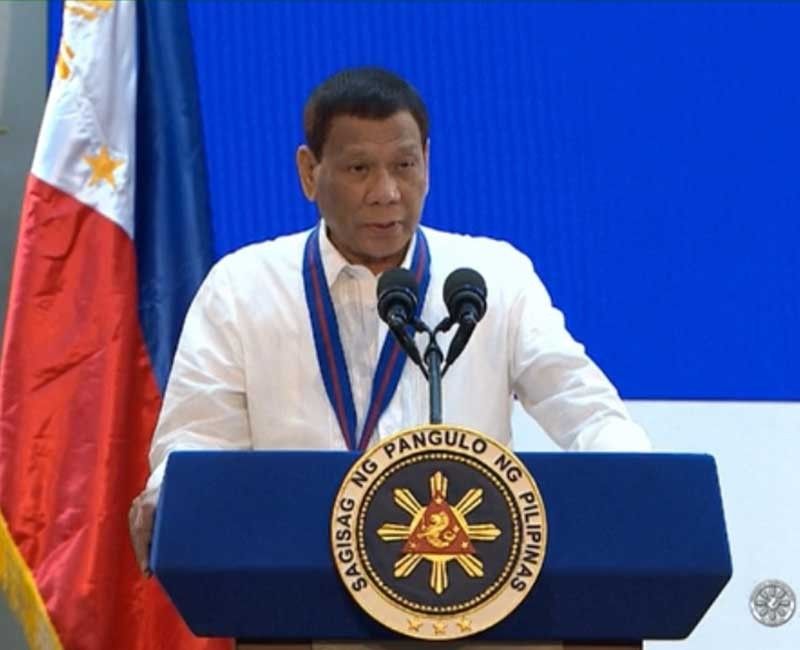 PRESIDENT Rodrigo Duterte on Friday, August 9, said police officers, military men and all Filipinos are free to engage in a gambling business as long as their franchises were acquired without corruption and they do not shortchange the government.

He also sternly warned uniformed men who engage in such operations not to use their position or office to intimidate, oppress or strike fear among their competitors.

The President further told police to observe delicadeza, a Filipino virtue that refers to adherence to generally accepted moral standards, by asking to be assigned to an area where they do not operate a business.

The President made this statement during his speech at the 118th Police Service Anniversary in Camp Crame in reaction to reports that retired police and military generals are engaged in small town lottery (STL) operations.

In an apparent defense of these retired officers, the President said he sees nothing wrong with engaging in a gambling business as long as all requirements were met and no "under-the-table deals" took place.

"Now, let me say this to you now. There are allegations that police generals, retired, are into the STL, lotto and whatnot. I said you do not have any problem with me," Duterte said before police officers during the 18th police service anniversary celebration at Camp Crame in Quezon City.

"If it's a bidding, you participate, as long as it is not rigged in your favor and you secure it, complying with the laws, no corruption, I will not begrudge you. If you have friends who are millionaires and would finance a corporation and you are an incorporator, I don't see any reason why you should not be in that business," he added.

Duterte said he was looking for the "best way" to ensure that the operations of other PCSO-licensed games would not be tainted with any irregularities.

"As of now, I allowed lotto because it is clean. It's really run by a machine and you know, the combination is done electronically. Yung others, STL, I'm trying to figure out the best way... Kung malinis lang ang negosyo ninyo, if it's clean, you don't deprive government of money due to the country and the people, okay sa akin. And I'm addressing myself to all," he said.

Duterte reiterated that he abhors gambling, but will allow "everybody, every Filipino", including policemen and military men, to engage in a gambling business because it is allowed by law.

"Gambling per se is not good but if it's allowed by law, I cannot be more popish than the pope. Hinihingi ko lang (My only request), do not shortchange government," he said.

He said he has a plan to ensure that government will get its rightful share from legal gambling operations and hinted that regulation of such businesses might be placed under the Office of the President.

"Ang hinihingi ko lang, do not shortchange government at talagang mawawala iyan all together. Now, if I can have my way, meron akong plano, hindi ko muna sabihin ngayon, but this will guarantee that the government will have the rightful share and we can always open your books and I can always ask the policemen and military what is happening there," Duterte added.

(My only request is do not shortchange government or you will lose everything. Now, if I can have my way, I have a plan but I will not disclose it now. But this will guarantee that the government will have the rightful share and we can always open your books and I can always ask the policemen and military what is happening there.)

Senator Panfilo Lacson earlier revealed that retired police and military officials who have cornered STL franchises allegedly do not remit shares from their collections to the Philippine Charity Sweepstakes Office (PCSO).

The President advised retired policemen and soldiers to operate their STL franchises outside their areas of jurisdiction to show decency.

"Pangit kasi tignan na ikaw ang chief of police diyan. It's propriety, You look for somewhere else because the Philippines is too big... My only advice to you is lumayo ka muna (go somewhere) or you invest in some other province. Do not oppress your competitors as they will shout foul and then you will drag me into the picture," he said.

(It does not look good that you're the police chief there. It's propriety, You look for somewhere else because the Philippines is too big... My only advice to you is go else where or you invest in some other province. Do not oppress your competitors as they will shout foul and then you will drag me into the picture.)

"Ang hinihingi ko lang naman is walang gapangan (My request is avoid manipulation) and no oppression or pressure. And if there's a bidding and you win it by all means but as if... You know, part of your honor, delicadeza, ask yourself to be assigned somewhere where you are not operating or a participant or an incorporator of a corporation doing business in your area," he added.

On July 26, Duterte ordered the suspension of all PCSO-licensed games, including lotto, STL, Keno, and Peryahan ng Bayan, because of "massive" corruption in the state gaming firm.

The President, however, ordered on July 31 the lifting of suspension of lotto operations in the country, since the lottery game "remained untainted."

The rest of the gaming schemes operated by the PCSO, such as the STL, Keno, and Peryahan ng Bayan, remain suspended, until Duterte's office completes the results of an investigation into supposed corrupt practices in the agency.

Earlier, Malacañang said Duterte is ready to identify at least 10 PCSO officials who are involved in corruption.