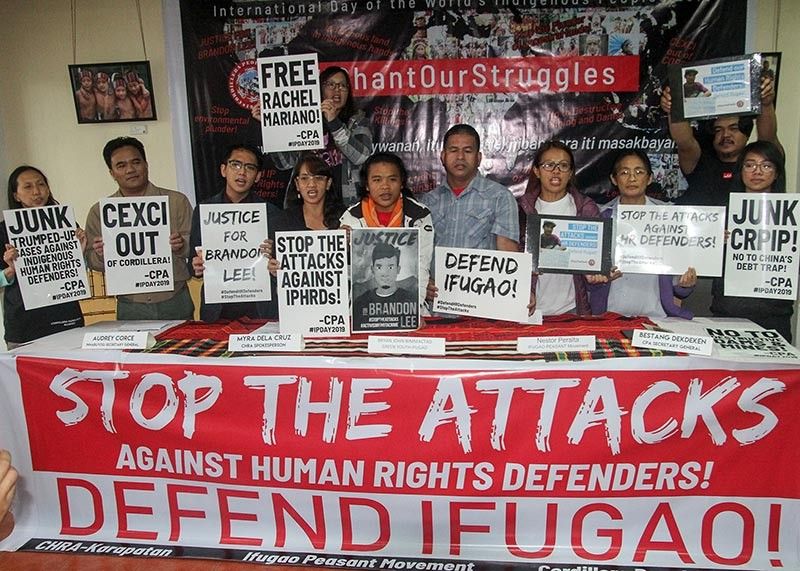 BAGUIO. Members of progressive organizations being labelled as allies of the rebel groups condemned the attempted murder of Brandon Lee, a human rights worker in Ifugao who is recuperating in a hospital days after he was shot by unknown assailant. (Photo by Jean Nicole Cortes)

POLICE are looking for two suspects in the shooting of a human rights advocate and journalist in Ifugao over the week.

Police Colonel Madeline Bazar, deputy director for operations chief of the Police Regional Office–Cordillera (PRO-COR), said the Provincial Special Investigation Task Group (PSITG) is continuously gathering information that will lead to the arrest of suspects involved in the shooting of Brandon Lee.

Based on the initial investigation, the Ifugao PNP together with the PSITG received information on the alleged presence of two individuals within the area prior to the shooting.

“We are also looking at the available CCTV in the area which may help us. Aside (from that), they have interviewed some witnesses, and we are now looking at persons of interest while waiting for additional information and looking at all possible angles and whoever maybe identified to be directly involved will be met with the appropriate charges,” Bazar stated.

“Ifugao Provincial Police Office Director Colonel Romeo Mangwag which is under our direct supervision reported they have already conducted a case conference. They are now awaiting the result of the crime lab on the caliber of the firearm used in the shooting. On their initial findings on the entry and exit of the bullet, it allegedly showed two hits on the victim,” Bazar said.

PRO-COR director Police Brigadier General Israel Dickson earlier ordered the activation of the SITG to focus on conducting an in depth investigation and case build up, aside from the immediate identification of the perpetrators and to determine the motive of the shooting.

Although no timeline was given to the task group to solve this case, Bazar explained the SITG will ensure the conduct of a quality investigation.

Lee works as a paralegal volunteer with the Ifugao Peasant Movement (IPM) and writes for the Northern Dispatch, a local weekly newspaper now an online news website.

CHRA said Brandon, a human rights worker and a volunteer staff for the IPM and the Justice and Peace Advocates of Ifugao, was shot and wounded by unidentified men whom they believe are state security forces or agents. The incident happened close to 6 pm at Lee’s residence in Lagawe, Ifugao. Prior to this, Brandon has been consistently subjected to different threats and harassment, even in social media, by the 54th IBPA for his involvement with the IPM and his human rights work.

Lee remains alive but in critical condition at a local hospital.

“Brandon saw the need for human rights work in the Philippines despite its dangers. He volunteered as a paralegal in Ifugao after William was killed. He devoted his time and skills for the work knowing its value to the indigenous peoples of Ifugao who have treated him as their own,” CHRA said.

“We hold accountable the State security forces that the Duterte administration has let loose in the Cordillera region – the 54th IBPA, the 5th Infantry Division of the Philippine Army and the Northern Luzon Command,” added the CHRA statement.

In a separate statement, Bayan Muna Rep. Carlos Isagani Zarate said it was fortuitous that Brandon escaped death from these “death squads” unlike many other human rights defenders who had been slain.

“It seems like that the dark army and mad dogs of the government that are responsible for the killings of thousands in the anti-drug campaign are now after activists, people’s lawyers, community organizers, and other human rights workers. From the whole of Mindanao, in Negros Island, and up to the mountains of the Cordillera, the murderous rampage of these death squads threaten the lives of many. President Duterte’s EO 70 and Memorandum Order 32 practically instructs the entire government machinery to suppress, repress, harass, and violate the rights of all who criticize and oppose the anti-people policies of the administration.

It comes to no surprise that the military is using these to try and legitimize their actions,” the House Deputy Minority Leader said.

“Brandon Lee’s assassination attempt is revealing of the type of government that we have when it threatens death to people like him, who serves the poor peasant and indigenous peoples so selflessly. We should not allow this to continue. This madness must stop,” Zarate added.

In 2015, the CHRA with other human rights organizations submitted a position paper to the United States Congress’ Tom Lantos Human Rights Commission in Washington, D.C. One of the cases cited was the death threats Brandon Lee received as a human rights worker in Ifugao. That year, Brandon and other IPM leaders and members were sent a photo of an Ifugao burial blanket with messages that they will face the same fate as human rights worker, William Bugatti who was extra-judicially killed in March 2014.