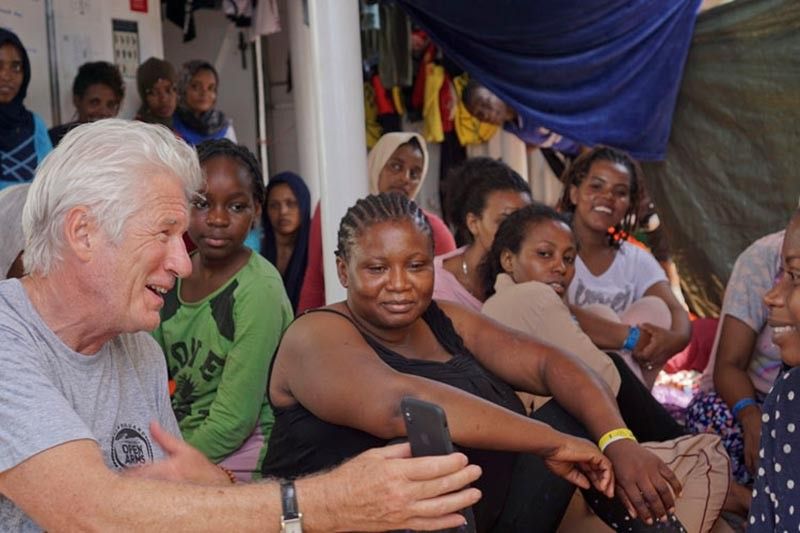 MEDITERRANEAN. Actor Richard Gere, left, talks with migrants aboard the Open Arms Spanish humanitarian boat as it cruises in the Mediterranean Sea, Friday, Aug. 9, 2019. Open Arms has been carrying 121 migrants for a week in the central Mediterranean awaiting a safe port to dock, after it was denied entry by Italy and Malta. (AP)

MILAN -- A Spanish humanitarian ship has been stuck in the Mediterranean Sea for more than a week because no European government will offer safe harbor to the 121 migrants on board, and the vessel faces a fine of up to 1 million euros if it enters Italian waters.

The Open Arms was idle for an eighth day Friday, August 9, in waters off Italy's southernmost island. The ship's dilemma is becoming increasingly common as European governments shut their doors to migrants, led by Italy's firebrand Interior Minister Matteo Salvini, who is popular for his hardline stance against migrant arrivals and who this week plunged Italy into a political crisis in an apparent play for power.

Open Arms founder Oscar Camps indicated that the vessel would avoid entering Italian waters without permission unless there is a humanitarian crisis on board, as allowed by international maritime law.

"Salvini can say what he wants, but maritime law and the courts will say what they have to say," Camps told Catalunya Radio on Wednesday. "If we have serious health problems on board ... we will enter (port) here or wherever we are, the closest place, today and any other day because we are backed by law."

Malta also refused to let the ship in, while Spain demurred, saying it is not the closest safe port, the humanitarian group said.

The EU Commission said Friday that it has not received any requests from a national government to intervene, as it typically requires. But spokeswoman Annika Breidhardt said the commission was reaching out to member states "to show solidarity." She noted a solution depended on "the willingness" of member states to step up.

In a bid to draw attention to the standoff, Richard Gere boarded the ship Friday some 27 nautical miles off Lampedusa. The actor helped bring food and supplies to the boat and asked for support for the ship, whose passengers include 9-month-old Ethiopian twins.

"The most important thing for these people here is to be able to get to a free port, to get off the boat, to get on land and start a new life," Gere said, urging the world to "please support us here on Open Arms and help these people, our brothers and sisters."

Pope Francis, long a champion of the migrants, repeated in an interview with the Italian daily La Stampa that the treatment of migrants "must never leave out the most important right of all: that of life."

"Immigrants arrive mostly to flee war or hunger, from the Middle East to Africa," he said.

Such standoffs have persisted over the last 14 months since Italy's populist government took office and Salvini became interior minister. He blamed the EU and other member states for leaving Italy alone to manage migrant arrivals for too long.

He likened rescue ships to migrant taxi services and raised the stakes this week by winning parliamentary approval for a new security decree that increased fines on ships entering Italian waters without permission to 1 million euros from 50,000 euros. The law has been scorned by the U.N. refugee agency, which said it could deter rescue by private vessels at a moment when European government have largely halted their patrols.

Italian President Sergio Mattarella signed the decree Thursday with reservations. He noted that the steep fine is to be applied without regard for the scale of the offense, against a high court ruling on penal sanctions. By that interpretation, for example, a sailboat carrying one migrant would face the same penalty as a ship with dozens or more.

The security decree was already in the works when German Captain Carola Rackete defied Salvini and entered an Italian port against orders of authorities, citing a state of necessity after 17 days stuck at sea with 40 rescued migrants. She is under two investigations, one for entering Italian waters against direct orders and another for allegedly aiding illegal immigrations.

Besides Open Arms, just one other ship is operating in the Mediterranean. The German NGO Sea-Eye said Friday it was leaving the search-and-rescue zone five days after transferring 40 migrants to Malta military ships after Germany made a direct request and agreed to take some of the migrants. A Norwegian-flagged ship operated by the humanitarian group Doctors Without Borders rescued 85 migrants from a rubber dinghy off Libya on Friday — but made no immediate request for a port.

Others that have been active in the central Mediterranean appear to be on standby waiting to see how the latest standoffs — and Salvini's threat — play out.

Migrant arrivals in Italy are down dramatically to some 4,042 so far this year, down 78% from last year's 18,897 and 96% from 96,847 in 2017. Many migrants continue to arrive on their own in Lampedusa, often from Tunisia, despite Salvini's campaign against humanitarian rescue ship.

The International Organization for Migration said 840 people have died this year crossing the Mediterranean. Of those, 576 were on the perilous central route from Libya. That figure is down by half from a year earlier.

In a letter Wednesday to the EU Commission president, the new European Parliament President David Sassoli called for emergency assistance for the migrants stranded on Open Arms. They include 32 minors and women who have visible signs of violence.

One woman, identified only as Hortensia, had gasoline thrown on her and was set on fire when she tried to escape her tormenter, he wrote.

"If Europe cannot protect that woman and her companions who have set out in search of a better life, it will mean that it has lost its soul, as well as its heart," Sassoli wrote. (AP)