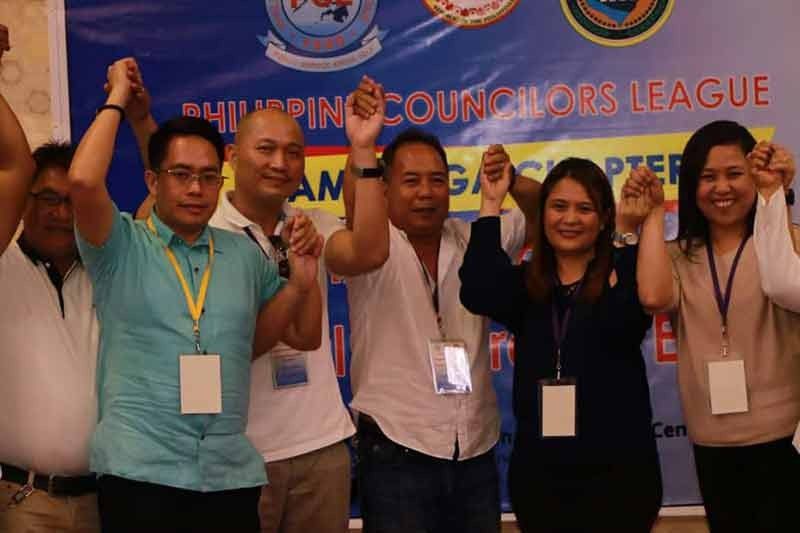 PAMPANGA. DILG Pampanga Dir. Mervi Favia proclaims Councilor Venancio Macapagal as the newly-elected President of the Pampanga Councilors League (PCL) together with Vice President Celestino Dizon, Treasurer Joel Samia and other officers. Macapagal will have a seat at the Sanggunian Panlalawigan as ex-officio board member. (Chris Navarro)

SAN Luis three-term mayor and now Councilor Venancio “Asyong” Macapagal is set to assume his post in the Pampanga Provincial Board after being elected as president of of the Philippine Councilors League (PCL)-Pampanga Chapter.

Department of Interior and Local Government (DILG) Pampanga director Myrvi Fabia, who chaired the PCL Commission on Elections, pronounced Macapagal as the new president during election held on Friday, August 9, at Kingsborough International Convention Center in the City of San Fernando.

Macapagal was supposed to run against Apalit Councilor Jedalyn “Jed” Dalusung but the latter withdrew his candidacy right before the election leaving the former as an unopposed candidate.

In his speech, Macapagal, who will now serve as ex-officio board member, expressed gratitude to his fellow Sangguniang Bayan members for trusting him the leadership of their organization and their representation to the provincial board.

The new PCL president likewise disclosed his top priority which is to further promote unity in the provincial league and recognize three-termer councilors in the province for their dedication to public service.