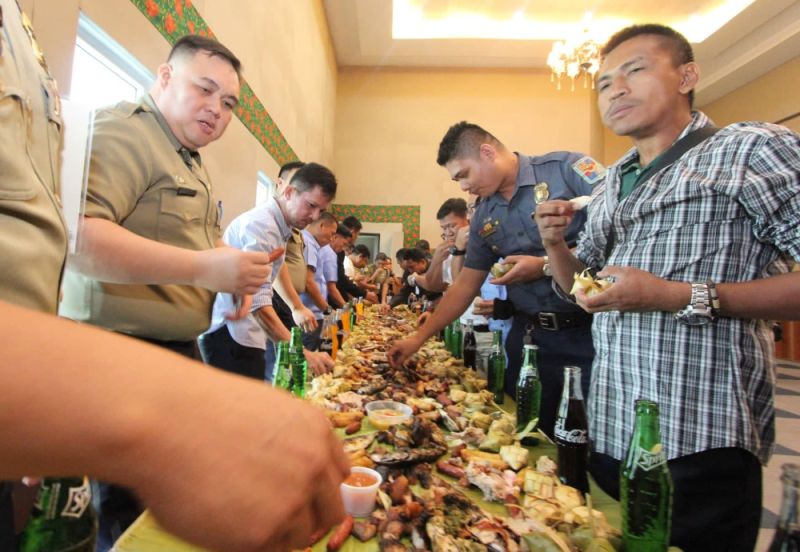 CHOW TIME. Graduates of the Explosive Ordnance Recognizance Training have a boodle fight to celebrate the end of the five-day activity. (SunStar photo/Amper Campaña)

SAFETY and security is everyone’s concern.

With several news reports of bomb threats and bombing incidents nationwide, including the confiscation of improvised explosive devices (IED) from several alleged communist members nabbed in Central Visayas, there is a serious need for a joint anti-terror effort.

And so the five-day Explosive Ordnance Recognizance (EOR) Training was held in Cebu City from Aug. 5 to 9, 2019.

Various law enforcement agencies in the region joined the activity that was initiated by the Cebu Port Authority (CPA).

Mark Anthony Yap, a certified safety personnel and the information officer of the EOR Training, said this was the third time the activity was held in Cebu.

“Although we have bomb-sniffing dogs (to do the identification), the ability of the human being to analyze and to have more comprehensive research is still valuable in identifying IED,” he said.

“For the training to be opened to various sectors is very important since law enforcement personnel could be reassigned. If we limit to only one sector or a limited number of people, that safety personnel could be gone next month,” he said.

According to Police Staff Sergeant Albert Comeros, a member of the special weapons and tactics team of the Liloan Police Station and one of the participants, the training taught him how to handle bomb situations to lessen or avoid casualties.

“The five-day training was worth my time. Since we came from various agencies, there was a period of adjustment, but definitely, this was very helpful,” he said.