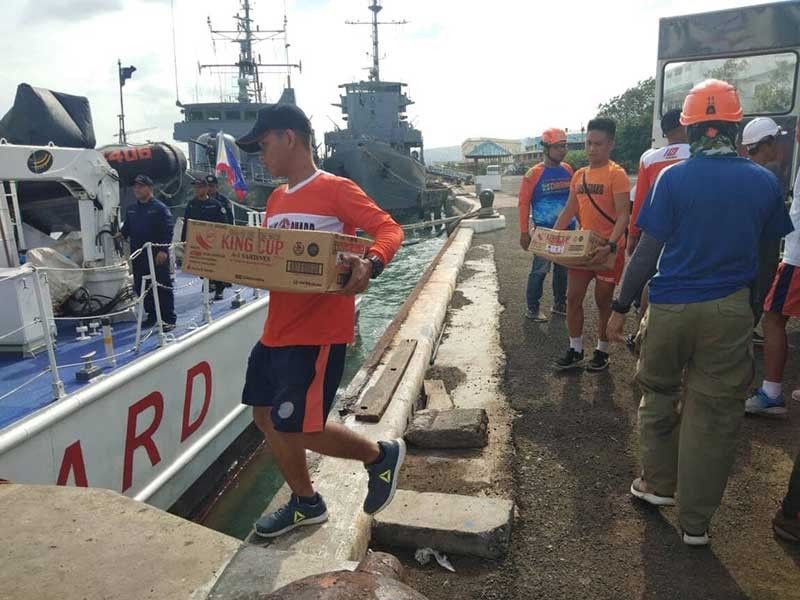 RELIEF GOODS. Food and other supplies bound for Olango were loaded on a Coast Guard ship on Friday, Aug. 9, 2019, ending days of isolation for the island. (SunStar photo/Herty Lopez)

THE weather bureau Pagasa has lifted the gale warning over Central Visayas.

However, it is still up in seaboards of Northern, Southern and Central Luzon; Western and Eastern Visayas; and Northern and Western Mindanao, according to the 5 p.m. bulletin of Pagasa on Saturday, Aug. 10, 2019.

Before the gale warning was lifted over Central Visayas, small motorbancas continued to ferry passengers, particularly from Olango Island to Lapu-Lapu City, despite rough sea conditions and the temporary travel ban.

Some Olango residents complained that passengers were charged close to P200 by unscrupulous boat operators during the seven days when travel from Olango to Punta Engaño was suspended.

But for those whose work depended on traveling between the islands, the risk was worth it.

Robinson Amit Dano, a math teacher at the Tingo National High School in Olango Island, said he knew of people who braved the crossing on unregistered motorbancas usually under cover of darkness since the gale warning was raised on Aug. 4.

Encina said they were aware of these illegal trips, which was why they conducted patrols.

Dano said the seven-day suspension of travel between Olango and Punta Engaño did not only affect their food and fuel supplies, but also their livelihood.

Dano said five of his friends lost their jobs after failing to report to work during this period.

Erwin Loregas, a resident of Barangay Ermita, Cebu City, was one of those stranded in Olango. He could not leave as no motorbanca would risk the crossing while the gale warning was in effect. He didn’t get back home until Saturday morning.

More than 100 public school teachers assigned in Olango Island were also temporarily reassigned to the mainland.

Meanwhile, Encina said delivering fuel to Olango would not be easy since the Department of Energy (DOE) required that it must be delivered by a separate vessel.

He said they are coordinating with the DOE to address the fuel shortage in the island.

As for food supplies, the Lapu-Lapu City Government, through the PCG 7, delivered food packages to affected residents in Olango last Friday, Aug. 9. (from HBL of Superbalita Cebu/JKV)