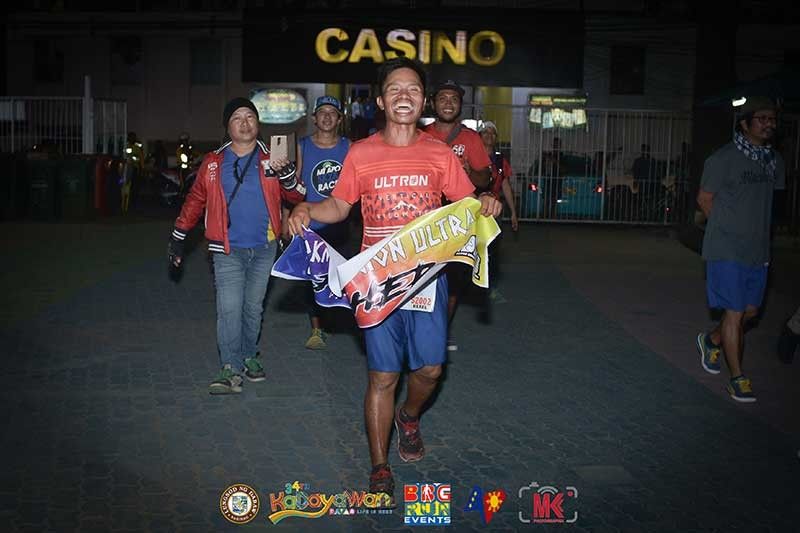 BARELY four hours of sleep in about 111 hours and 20 minutes, at times just taking a five-minute nap to rest his weary eyes and worn out body that was already pushed beyond its capacity to endure, or an hour to lie down by the roadside for a quick recharge.

Over the past four days, 41-year-old Rexel Aguirre of Team Tadeco only made two stops to use the toilet and take a bath as he also obliged himself to eat in karinderyas along the highways just to gain whatever energy he lost thus far.

But all the discomfort, including a swollen feet filled with blisters and bruises and sore muscles, were somehow forgotten upon seeing the warm reception at the finish line at People’s Park in Davao City around 2 a.m. yesterday, August 10, led by his wife Lucy and children Luzalle, eight, and Sophia Claire, three. His parents came, too.

Jay Bustamante of Team Titans Davao finished second after clocking 114:40 while Don Amoro of Team Pabo registered 123:55 for the third spot. Before the race, he ran an 80K for three straight days without sleep just to prepare him for the race. Vitamins and proper hydration helped sustain him.

He had overtaken first day leader Jonathan Pido of Philippine National Police (PNP) 11 while in Carmen. Aguirre said Pido blasted off from the start but he only took his time, running on his own pace and focusing on his training program.

“Ang akoa ra man jud nga makahuman ko, bonus nalang nga nag-champion ko (I only wanted to finish. Becoming a champion was just a bonus),” he said, adding, that the route going to Malita was toughest for him as it was too hot and the rigorous climb to Santa Maria was beyond what he expected.

His curiosity got the better of him when he first heart about the ambitious race. He joined to challenge himself whether he could finish.

DRU520 is presented by the City Government of Davao through the Sports Development Division of the City Mayor’s Office.