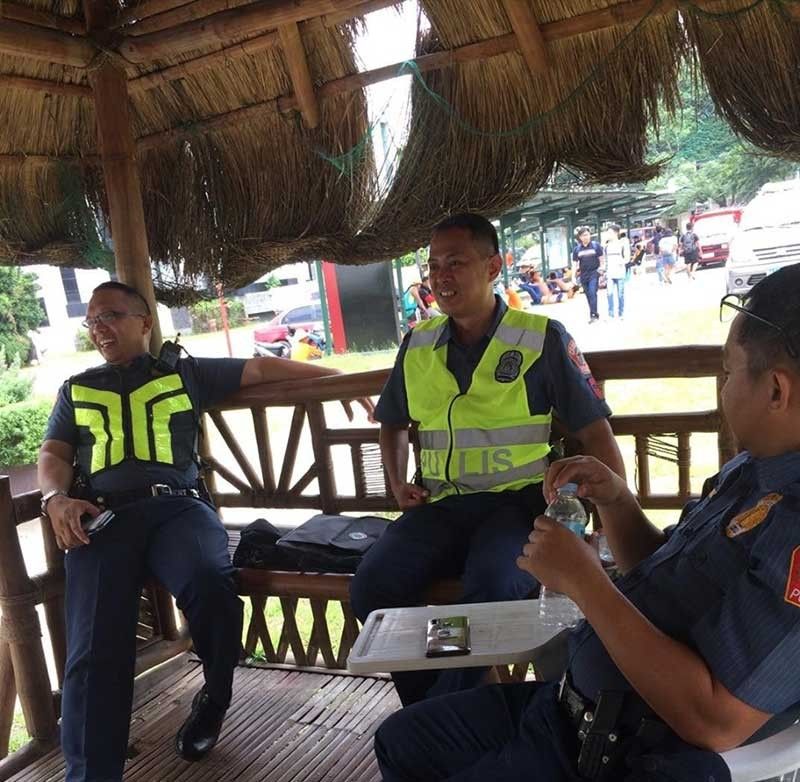 CEBU. A Facebook post by University of the Philippines College Cebu student publication Tug-ani shows four police officers sitting in one of the Arts and Sciences huts (kubos). The post quoted UP Cebu Vice Chancellor for Administration Weena Jade Gera as saying that the police were there to assist in the demolition of houses occupying a university property, but the administration did not allow the policemen to occupy space allotted for students. (Photo from Tug-ani Facebook)

THE Department of the Interior and Local Government (DILG) will review an agreement forged with state universities and colleges on police presence in schools in the wake of alleged recruitment activities by left-leaning groups.

“The DILG is keen on revisiting and reviewing the memorandum of agreement with State Universities and Colleges regarding police visibility in infiltrated schools and universities,” DILG Secretary Eduardo Año said on Sunday, August 11, 2019.

“The Department is geared to conduct dialogues and engagements with school authorities and the students themselves to raise awareness on the modus operandi of the CPP-NPA-NDF (Communist Party of the Philippines-New People’s Army-National Democratic Front),” he added.

Año made the statement a few days after parents testified during a Senate hearing on Wednesday, August 7, that their sons and daughters were recruited by leftist organizations.

He urged the parents to be vigilant and be more involved in guarding their children as the communist rebels “have little to no regard for the lives of the youth” and were masquerading as progressive pro-poor organizations.

“These organizations are brainwashing the children and destroying the youth of our country,” said Año.

"There is a violation of the law in these recruitments. Minors are easily lured kaya tutulungan natin ang mga magulang na ito para mabawi nila ang mga anak nila mula sa mga terorista. Those mothers in the Senate hearing mirror the sentiments of many families who have lost sons and daughters to the bankrupt ideology of these terrorists and leftist groups," he added.

The DILG said 500 to 1,000 youths are being indoctrinated by the CPP-NPA each year. They become members of the NPA living in secluded areas and mountains or they go back to their schools and become militant student leaders.

At the University of the Philippines College Cebu campus, student publication Tug-ani posted on Facebook how police officers sat beside students in one of the Arts and Sciences huts on August 8, 2019.

"WE DID NOT ALLOW IT." UP Cebu Vice Chancellor for Administration Weena Jade Gera has clarified that although police...

The student publication quoted UP Cebu Vice Chancellor for Administration Weena Jade Gera as saying that the police were there to assist in the demolition of houses occupying a university property, but the administration did not allow the policemen to occupy space allotted for students. (SunStar Philippines)
< Previous PageNext Page >