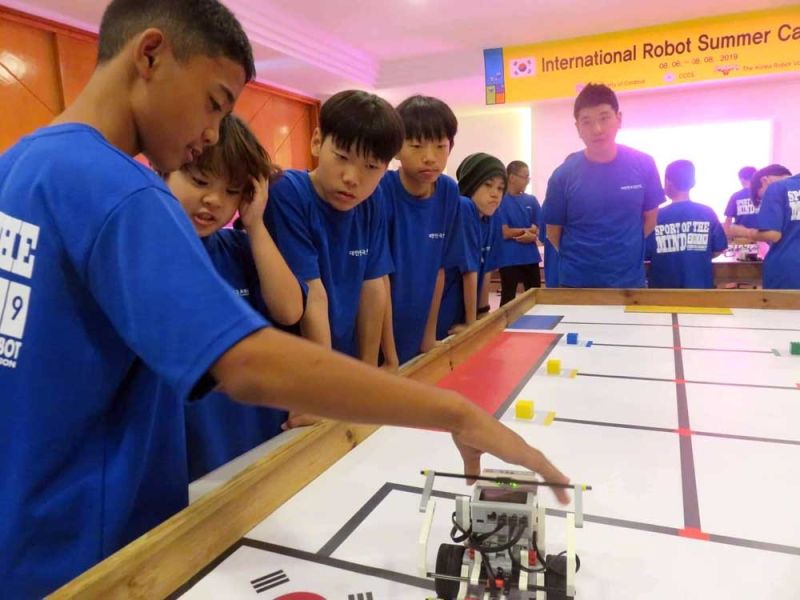 START THEM YOUNG. The Korean Robot Volunteer Team wants to stimulate international exchanges and boost the promotion of robot education to other countries like the Philippines. (SUNSTAR FOTO / ALLAN CUIZON)

THE Korean Robot Volunteer Team will now be holding a robot camp in Cebu every year as it aims to transfer robotics knowledge to Cebuano students.

The non-profit organization, through the Cebu Korean Organization Inc., brought the first International Robot Summer Camp to Cordova, Cebu recently from Aug. 6 to 8, 2019.

Cho Yong Man, chief executive officer of the volunteer group, said they wanted to bring robotics knowledge to Cebu as this is an important industry in South Korea.

“This is more of a transfer of knowledge by Korean students to Cebuano students,” he said at the culmination event on Aug. 8.

According to Cho, the field of robotics is increasingly becoming a vital industry in Korea amid the massive technological advancements in their country.

Robotics has also emerged to be an important field nowadays amid the emergence of artificial intelligence and automation in various industries, he said.

In fact, he said Korean students learn robotics as early as 10 to 15 years old as it is already part of their curriculum.

The Korean robot group was established in 2012. It aims to stimulate international exchanges and boost the promotion of robot education to other countries.

The first camp held in Cordova was the organization’s first in the Philippines.

Cho said part of the plan is to hold the robot camp even twice a year in Cebu. The group has recently signed an agreement with the municipal government of Cordova.

Through this initiative, Cho noted they hope to perk up the interest of Filipino students in robotics and pursue this field in the future.

Earlier, Josette Biyo, director of Science Education Institute, an agency under the Department of Science and Technology, expressed optimism in the future of robotics in the country at the recently held 13th Philippine Robotics Olympiad (PRO).

“In the Philippines, there is a lot of interest and potential for robotics,” she said in a statement.

The PRO, she noted, is a testament of the bright prospects for Philippine robotics.