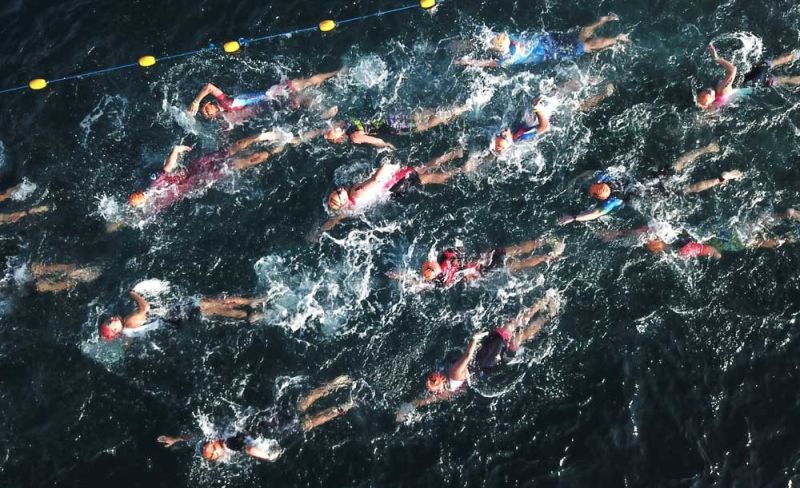 FIRST OF THREE. Participants brave the waters off Mactan for the opening leg of the 70.3 Ironman Cebu. (SUNSTAR FOTO / ALLAN CUIZON)

DESPITE the scorching heat that reached about 38 degrees Celsius at noon, triathletes were satisfied with their experience in the Regent Aguila Energy Drink Ironman 70.3 Philippines.

The eighth edition Ironman 70.3 Philippines in Cebu drew about 2,500 participants from 57 countries to Shangri-La’s Mactan Resort and Spa in Lapu-Lapu City on Sunday, Aug. 11, 2019.

“Cebu has always been fantastic. The atmosphere was great and the people were great and welcoming. As always, the organizing was good. It was my third race in Cebu and it’s good to be back,” said Gino Abano.

Abano, a marketing director for Specialized, competed in the men’s 40 to 44 age group. He said the run was always challenging in Cebu, especially with the kind of heat.

It was the same sentiment for Abdul Rahman Alhosani of the United Arab Emirates who competed here for the second time.

“My country is hot so I’m used to hot weather. But it’s different today and you have to battle the challenge. Overall, it was a good organization and that’s the reason why I’m coming back and plan to return here for the next edition,” he said.

Alhosani competed in the men’s 35 to 39 age group.

Edgar Ferrer of California, USA, meanwhile, was satisfied with his first experience in Cebu.

“The experience was first class. I have been doing this since 2015 back in the US but it’s my first time in Cebu. I can say the experience here is just first class,” said Ferrer, who hails from Isabela.

“My teammates in Team Yolo encouraged me to come here,” said Ferrer, who was listed in the men’s 25 to 29 age group division.

Professional triathlete Tim Van Berkel, who placed second behind eventual champion Tim Reed in the men’s side, also mentioned the humidity and the heat during the race.

“It was bloody hot. We just battled for the podium finish,” said Berkel, who added that it was the support of the people of Cebu that made this race unique and exciting.

“What I like here was the great support from the people,” he said.

Aside from the individual category, there was a relay race with three people doing one discipline each.

The Team Shell V Power, a team composed of Cebuanos who are now based in Manila, was another returnee this year. The team had swimmer Tammie Lucas, biker Ronn Canono and runner Lor Canono.

“It was more of a fun activity for us. We joined to finish and enjoy this race,” said Lor.

“As usual it was a very well organized race, there were a lot of activities,” said Lucas. “It was hotter, though, this year.”

“The bike course was better this year because the SRP (South Road Properties) was back,” said Ronn.

Last year, organizers were forced to look for a new route after then Cebu City mayor Tomas Osmeña denied them the use of the SRP, citing the construction of the Mambaling underpass.

“I’m very happy with the overall outcome of the race. We’ve had some accidents but all were minor. I’m happy because Lapu-Lapu City really did their best and all the other cities to make this event a success,” said Sunrise Events Inc. general manager Princess Galura in an interview during Meet The Pros.

“The next few weeks will be busy for us as we assess and start to prepare for next year,” she said.