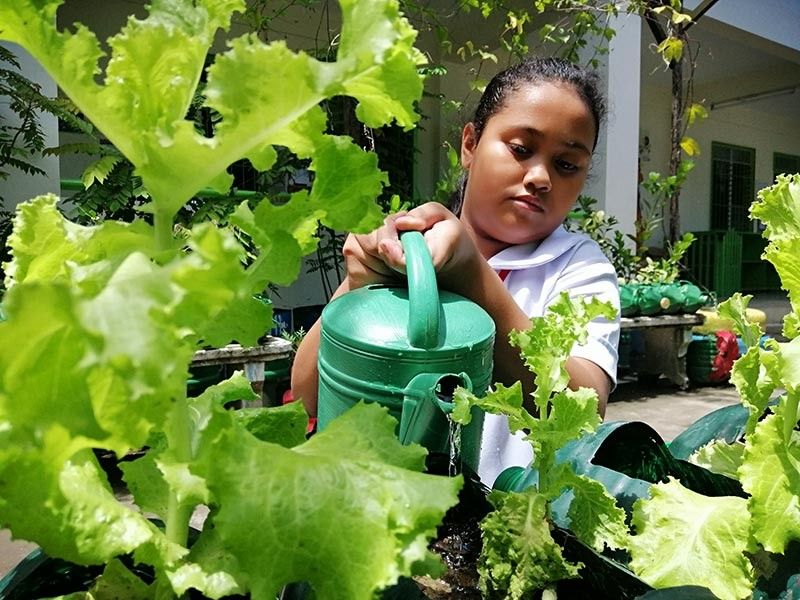 DAVAO. A joint partnership program of the Department of Education (DepEd) and the Department of Agriculture, the “Gulayan sa Paaralan” program seeks to address malnutrition and promote vegetable production and consumption among schoolchildren. (Photo by Ralph G. Llemit) 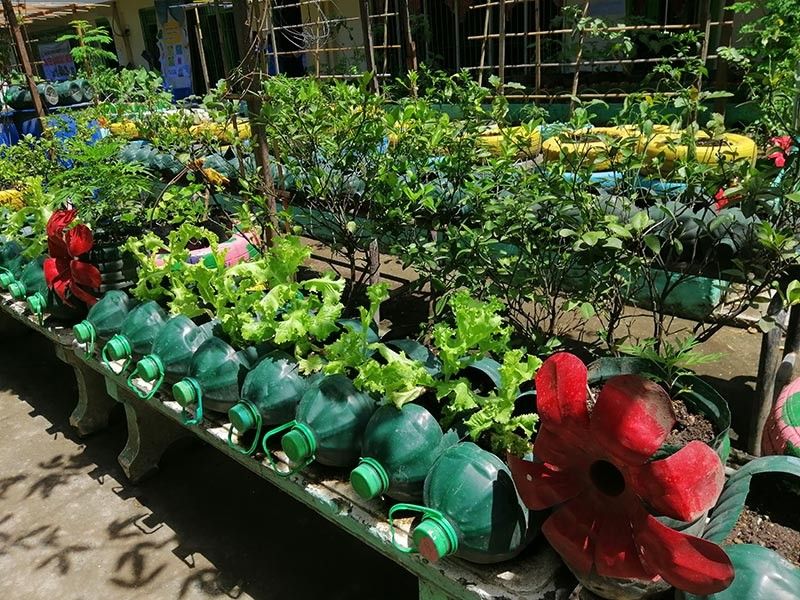 DAVAO. San Roque Central Elementary School has been recognized as a role model for other schools on the implementation of the “Gulayan sa Paaralan” program. San Roque Elementary School was also a Lunhaw Awardee for Education and Advocacy in 2018 for its vegetable garden. (Photo by Ralph G. Llemit)

MAKING children appreciate vegetable gardening is one crucial task that has been delegated to Ellen Estacaan, a teacher by profession but an agriculturist at heart.

When she was tasked to be the “Gulayan sa Paaralan Program (GPP)” coordinator of San Roque Central Elementary School, she took a second vocation, which is not only to entice the younger generation to go into agriculture, but also to solve malnutrition.

When San Roque started to actively participate in GPP in 2014, she admitted it was hard to pull off.

Estacaan did not study agriculture, so teaching a pupil as young as six years old about the basics in gardening was challenging.

Her efforts, eventually, grew like the vegetables in the school's garden, which eventually became one of the role model public schools in Davao City in the GPP implementation.

Considering the school's tight space, they adapted the urban container gardening, a method used to grown containers such as pots rather than into the ground. Instead of buying pots, they utilize plastic bottles, cans, and, even car tires.

Estacaan said the active participation of the school community, from the students, administration, and the parents, were behind the program's success at the school.

“We were able to expand the advocacy not just within the school, but also to the whole community,” she said, adding that passion and advocacy was her secret to the program's full force implementation.

All elementary and secondary public schools in the country are mandated to participate in the program, which aims to address malnutrition, and provide health awareness by letting the students plant vegetables through organic methods.

Admittedly, not all schools are able to implement it.

“Those spaces in the schools which used to be allocated for gardening, are now turned into school buildings,” Fabia said.

However, with the new advanced methods of vegetable gardening introduced by Department of Agriculture, she said schools can still implement it.

The sustainability rate for these gardens combined, however, is only 40 percent.

Despite struggles in its implementation, there has been improvement in the nutrition status of students enrolled in the feeding program of the GPP.

Planting vegetables is also being pushed within households, especially in farflung areas.

Davao City Health Office (CHO) nutrition officer Beth Banzon said they are encouraging each barangays in the city to strengthen its “gulayan sa barangay” program, a community-counterpart of GPP.

Despite the lower turnout of malnutrition in Davao City, which is 0.9 percent, as per CHO head Josephine Villafuerte, the office said there are still nutrition-depressed barangays in the city.

Banzon said these geographically isolated and disadvantaged areas (Gida) have no access to food and health services, and are considered progressively left behind due to lack of road infrastructure for the delivery of goods and services.

“We are encouraging them to plant vegetables within their own backyard. If these parents will not plant, they won’t have sources of food since food are scarce in their areas,” Banzon said.

Aglibot said millennials must be re-introduced to gardening, as the agriculture industry is struggling for more production due to the lack of farmers.

DA regional focal person Ken Dungo said the agency has allocated P7,381,000 worth of agricultural supplies and tools for 615 schools in the region.

While Estacaan said GPP’s feeding program helped reduced the severely wasted or malnourished, she hopes she and the school community would be able to sustain the program implementation and continue improving the health condition of the students.

Because her role as a teacher does not stop in feeding their minds, but this time, making sure these students are fed with the right food, which could help in their scholastic journey.