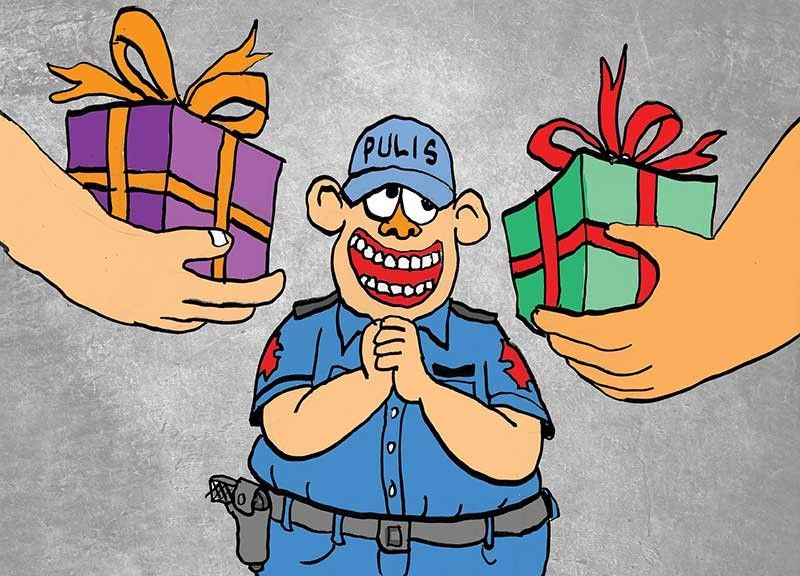 SOMETHING’S lost in translation from President Rodrigo Duterte’s statement: “Hindi ko kayo iipitin, basta ‘pag bigyan kayo eh tanggapin ‘nyo. It is not bribery...it cannot be bribery because it is allowed by law. What I mean, if there is generosity in them, sabi ng anti-graft (law) you cannot accept gifts? Kalokohan.”

He spoke before police officials and personnel during the celebration of the 118th Service Anniversary at Camp Crame last Friday, Aug. 9.

Easily, the translations seize the part on the President’s contortionist notion of bribery. Cops, he said, may accept gifts. If they are given out of generosity, the law allows it. The anti-graft law that says cops cannot accept gifts is nonsense, he said.

Section 7, Paragraph D of Republic Act 6713 or the Code of Conduct and Ethical Standards for Public Officials and Employees says thus: “Public officials and employees shall not solicit or accept, directly or indirectly, any gift, gratuity, favor, entertainment, loan or anything of monetary value from any person in the course of their official duties or in connection with any operation being regulated by, or any transaction which may be affected by the functions of their office.”

The law pretty much makes it clear, and there is certainly substantial wisdom behind it.

Sen. Panfilo Lacson was quick to react to the President’s statement on social media. He said: “Mr President, insatiable greed starts with simple, petty graft. It could be more addicting than drugs. There is no detox, nor is there rehab facility available for addiction to money.”

Since the law is clear, it may be put to test by private citizens catching corrupt cops in a “bribe-bust,” if only by some stretch of the imagination.

But here’s what is lost in the translation—that part when the President said, “Hindi ko kayo iipitin...” That’s about as close again to declaring impunity among the police. Just what exactly does the President mean by that?

We read the statement as another act by the President of pushing the envelope, polluting the minds of policemen whose prime duty it is to uphold the law. Just like how his sweeping assurances of protecting cops in the drug war had become a perfect enabler for the monstrous mess it had become.

This is another blow by the President that should better inspire our institutions to hold fast to the rule of law. Be the citizenry that’s better than any toxic suggestion.