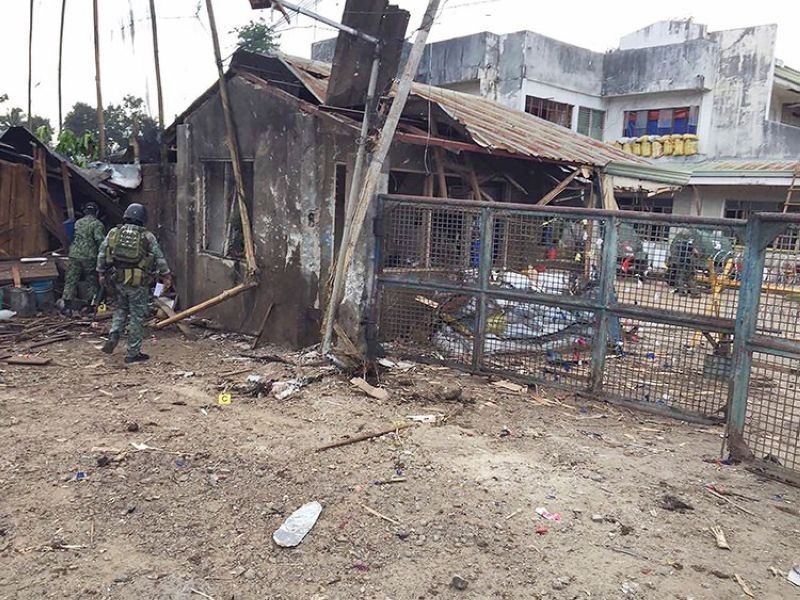 SULU. In this June 28, 2019 photo, troops examine the scene of the suicide attack carried out by terrorists at a military camp in Indanan, Sulu. (File Photo)

A SOLDIER was wounded as another set of explosions rocked Sulu in Mindanao on Tuesday morning, August 13, less than two months after suicide bombers attacked a military camp in the province.

Bangsamoro Autonomous Region in Muslim Mindanao (BARMM) Police Director Marni Marcos said the first explosion in Barangay Igasan in Patikul town happened at around 7:30 a.m. Tuesday. No one was hurt.

The second explosion occurred at around 8:35 a.m. just 10 meters away from the site of the first blast , where police and military personnel were responding.

The wounded soldier was identified as Corporal Rene Mediana of the K9 unit under the Army’s 43rd Infantry Battalion. He sustained multiple shrapnel wounds on lower part of his body.

These latest explosions occurred more than six months after the Jolo Cathedral bombing and about seven weeks after two suicide bombers triggered explosions that rocked a military camp in Indanan town in Sulu.

Three soldiers as well as the suspected suicide bombers were killed in the Indanan blasts on June 28, 2019.

On January 27, 2019, more than 20 uniformed men and civilians were killed when two alleged bombers also detonated explosive devices at the Our Lady of Mount Carmel Cathedral in Jolo.

Meanwhile, Philippine National Police (PNP) Chief Oscar Albayalde urged his men and the public to stay vigilant and alert at all times.

“Talagang may problema sa lugar na yan talagang may nakakasingit, especially so kung determined ang mga enemies of the state kaya we need to be vigilant and alert always,” he said.

(There is really a problem on violence in that province. Enemies of the state are determined to carry out attacks which is why we need to be vigilant and alert.)

(It's very important for the community to provide information so we can put a stop to these incidents.) (Third Anne Peralta-Malonzo/With reports from Bong Garcia/SunStar Philippines)