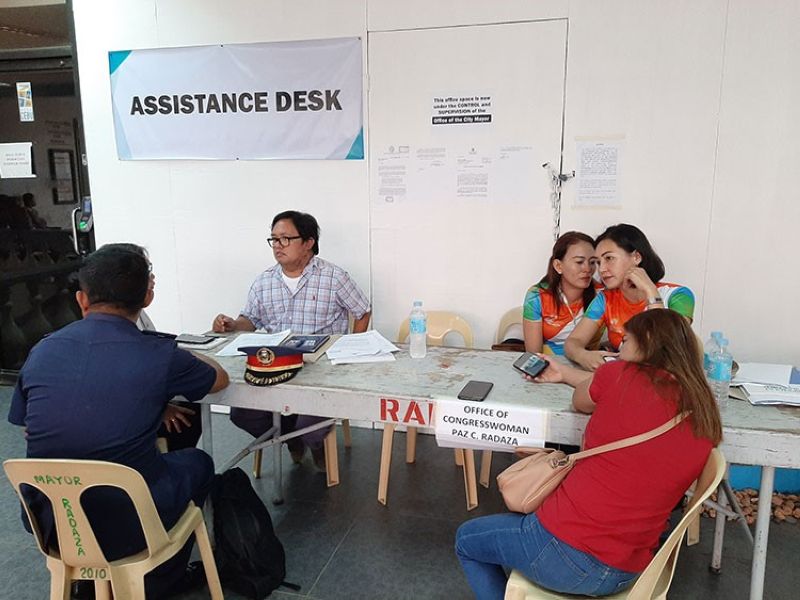 THE staff of Lapu-Lapu City Representative Paz Radaza has put up an assistance desk outside the lawmaker's padlocked office at the City Hall Tuesday, August 13.

Radaza's office was covered by wood paneling and padlocked by the office of Mayor Junard "Ahong" Chan, who insisted that the City Ordinance 14-200-2019, which allows Radaza to hold a district office at the Lapu-Lapu City Hall, was “ineffective and invalid.”

James Sayson, Lapu-Lapu City legal officer, said Monday, August 12, that they were only complying with the legal opinion Chan received from the Department of the Interior and Local Government (DILG).

Lawyer Kim Castro, legal counsel of Radaza, said Tuesday, August 13, they have no plans of removing the wood paneling that was used to cover the lawmaker's office, but they will continue to offer services to the public, stressing there is no court order that prohibits them from doing that.

But while Radaza's assistance desk was put up Tuesday, August 13, the staff of Chan also set up a table and chairs outside the padlocked office.

To prevent possible tension between the two parties, members of the Lapu-Lapu City Police Office Mobile Force Company were deployed to City Hall.

Last August 9, Chan sent a notice to Radaza to vacate the office after the mayor received the DILG's legal opinion.

The DILG opinion said the ordinance that provides a space for Radaza at the City Hall could not be considered effective, since it was not published in accordance with the Local Government Code.

The DILG also stated that the mayor, not the City Council, has the power to allocate and assign offices at City Hall. (From GCM of Superbalita Cebu/LMY)