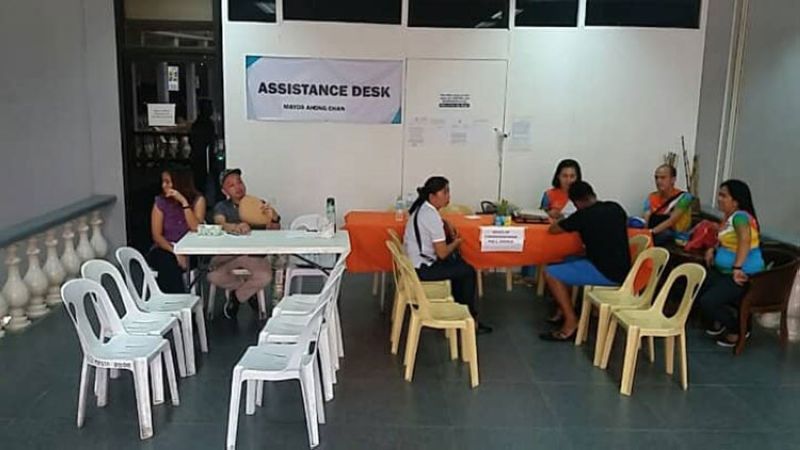 CEBU. The staff of Lapu-Lapu City Representative Paz Radaza and Mayor Junard Chan set up tables and chairs outside Radaza's office that was padlocked Monday, August 12, 2019. Yellow chairs for Radaza and white for Chan. (Photo by Alan Tangcawan)

* CIDG TO 'DEFINITELY' CHARGE COCKPIT OWNER. Thus assured the police group that raided D&C Coliseum last August 5. The owner, manager, promoter, gaffers and other cockpit personnel were not enumerated, much more identified. Only the bettors, whom the Cockfighting Law does not include in the penal provisions, owned up their "offense," and were convicted and released.

* "GOODBY, OLD FRIEND, MAY THE FORCE BE WITH YOU." Thus said Jedi master Obi-Wan Kenobi to Anakin Skywalker in the "Star Wars" movie. And thus advised Senator Ping Lacson to Foreign Affairs Secretary Teddy Locsin, who is scheduled to talk with China's foreign minister, Wang Yi, on the West Philippine Sea issue. Some people are hoping the talk between the two foreign ministers won't become a love fest, with Locsin saying, "I love you three thousand" (Tony Stark in "Avengers: End Game").

The photo of two tables at Lapu-Lapu City Hall -- beside each other, in front of a boarded-up office, with a group of people managing each and rows of differently colored chairs for visitors -- may go down in current events as one of the most ludicrous images from local governments this year.

One table is set up by the staff of Representative Paz Radaza, with yellow chairs, and the other by Mayor Junard Chan, with white chairs. What, they're campaigning again?

Radaza would've reason, not necessarily dictated by need to serve her public, to move her district office outside the office space supplied free to her congressman husband, then her congresswoman daughter. Chan had the office boarded up after receiving the DILG legal opinion that supports his stand: namely, the city is not obliged to continue the free facility for the new congresswoman, whom he defeated in the May election.

Paz, who like Mayor Ahong had requested for the DILG legal opinion, rejected it, saying she'd wait for the court ruling on their dispute. Meantime, to show her defiance and toughness, she continued the sideshow. She's now "holding office" outside the office, as if the job of congresswoman is the same as the work of city chief executive that her husband failed to snag.

No need to compete

Mayor Ahong though wouldn't have to compete in the theatric. He is the mayor; he controls and runs City Hall. He could clear the space of the Radaza table as it must obstruct the space outside the building's offices, aside from disabling the disputed district office. Instead, Chan added to the clutter, lending his own antic to the ridiculous situation.

The mayor has different departments, located in comfortable offices, that serve the Lapu-Lapu public. What is the need for another table beside Radaza's table?

That the quarrel over office space has led to a competition to serve the public is incongruous because each dispenses different services. Paz may be reminded her work is no longer executive but legislative. And why must she hold her district office there when most other House legislators keep their offices at their residence or a rented private office space paid for by the national government?

Unless each camp thinks that now is a good a time as any to start the campaign for 2022.

"Cong" Radaza's fiesta-like, a-la-sidewalk display fuels the accusation that she is using the City Hall venue to reach out to the same clientele that Mayor Ahong serves: she is already preparing for the next election. Which must give Chan more personal and partisan reason to make her leave the building.

Apparently, the mayor has found it difficult to effect the eviction, despite his control of City Hall and the support of the law and DILG, which oversees LGUs. Instead, the mayor has succumbed to Paz's bait of engaging in this superficial and laughable stunt.

Enough already of the entertainment. The city has larger and more important things to do. If both camps are listening, they must hear that from their respective flock of supporters.