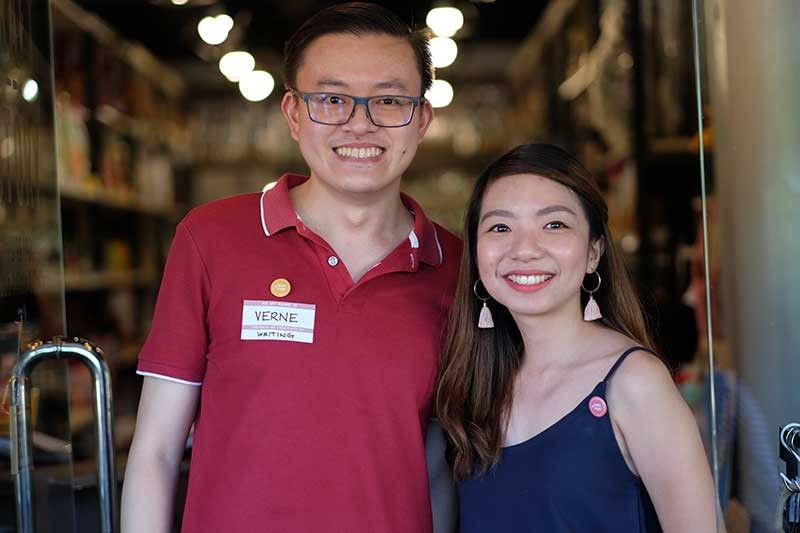 WHERE CREATIVE MINDS MEET. Business partners Kim Gillesania (right) and Verne Ahyong open Craft Story Cebu to serve as the launching pad for creative entrepreneurs who want to showcase their skills in art, and at the same time, earn a living from it. (Contributed photo)

Started by arts and crafts aficionados Kim Gillesania and Verne Ahyong, Craft Story Cebu has now become the go-to place of local and foreign tourists who want to bring with them a piece of Cebu in forms of postcards, handmade soaps and shampoos, fashion accessories, dream catchers and other arts and craft materials that are made and designed by Cebuanos.

The curated concept store houses about 50 crafters who pay space rental ranging from one month to one year.

“We opened Craft Story Cebu so we could feature independent Cebuano artists and crafters in one roof whose products are sold at an affordable price,” said Gillesania. “We are a store that gathers their creative works.”

Gillesania said she can’t find a store here in Cebu that sells such pieces or one that meets the needs of hobbyists and fellow crafters.

“In Manila and other countries, they really have craft stores dedicated to local craft makers. Sadly, we can’t find one in Cebu, so we grabbed the opportunity and opened one to serve this market,” she said.

Since its opening, Gillesania said the store is frequeny flocked by foreign and local tourists as well as yuppies, who are into arts and crafts.

She said many are surprised, especially foreign tourists, of the products’ affordable prices. She mentioned a story of a Japanese tourist who wanted to buy a lot as homecoming gifts.

Because of its unique market, the store is getting a lot of applications, the reason the owners are planning to expand the store to areas with high foot traffic.

“We are amazed by the strong interest from the crafters community. This just proves that they are ready to showcase what they have but what’s limiting them is the venue where they could bring all of their products,” said Gillesania.

She said arts and crafts stores have a place in Cebu’s retail market because aside from serving a niche market, selling the concept is easier as Cebu is selling it itself globally as the country’s creative hub.

In fact, Cebu has sent its application to be recognized as a “Creative City” by the United Nations Educational, Scientific and Cultural Organization (Unesco).

Specifially, Cebu has sought the Unesco classification as a creative city under the design category, the highest designation among the seven categories.