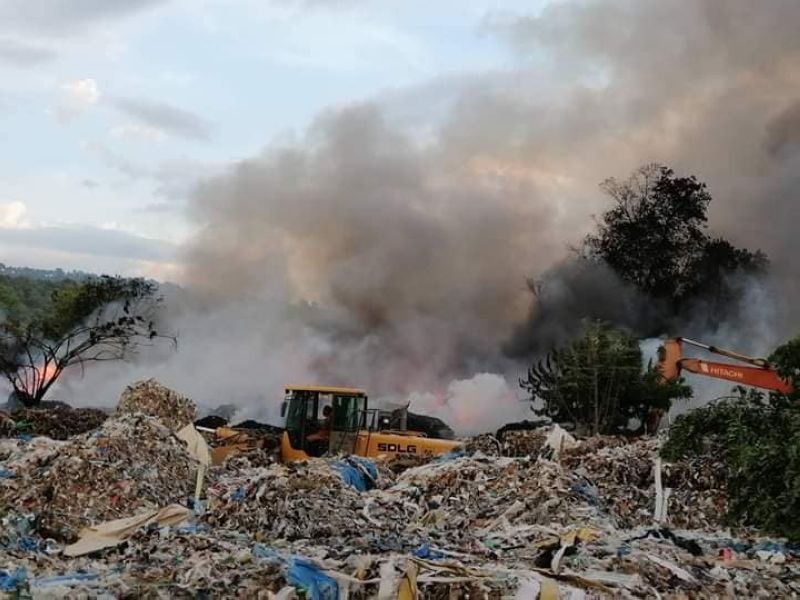 TAGOLOAN. Misamis Oriental Representative Juliette Uy shows a portion of garbage stockpile being burned. The garbage is scheduled to be shipped back to South Korea this month. (Photo courtesy of the Misamis Oriental 2nd District)

A FIRE incident inside a compound in Tagoloan, Misamis Oriental on Monday, August 12, burned the remaining garbage from South Korea, prompting government officials to investigate whether it was intentional or accidental.

Misamis Oriental Board Member Gerardo Sabal III said the Capitol's legislative body will launch a probe into the incident.

Sabal said they would invite the importer Verde Soko, Bureau of Customs, Phividec, Department of Environment and Natural Resources (DENR), Bureau of Fire in the province, and the local government of Tagoloan during the investigation.

He said they would determine the actual cause of the fire, as well why the re-bagging of the garbage due for re-export to South Korea was delayed.

The garbage was set to be returned to South Korea this month.

"We will call for a formal investigation regarding the matter," Sabal said. "We want to know the real cause of the alleged fire and why up to now, Verde Soko has not finished re-bagging the garbage to be shipped back to South Korea as agreed."

Sabal also said they want to know whether the fire was intentional.

"We will try to find out if it is arson. We are wondering ngano naka sulod sa compound na naa man guard," Sabal said.

Meanwhile, Misamis Oriental Second District Representative Juliette Uy posted on social media her proof of the burning of the Verde Soko garbage even as she called for an immediate "arson" investigation.

“I appeal to the National Bureau of Investigation, Bureau of Fire Protection, and the Department of Environment and Natural Resources to immediately go to the Phividec industrial estate to investigate and arrest all those responsible for this air pollution crime," Uy said.

"Whoever committed this crime are sabotaging our lawful efforts to enforce our country's anti-pollution laws. Now, they have made matters worse by polluting the air in Misamis Oriental with the toxic fumes from the burning of the garbage," Uy added.

In June, a bilateral agreement between the Philippines and South Korea was met, where the latter promised to shoulder part of the expenses for the trash to be shipped back to its territory.

On the other hand, the waste and pollution watchdog, EcoWaste Coalition, supported calls for investigation and urged the government "to leave no stone unturned in Verde Soko fire investigation."

“We strongly deplore the fire incident that has only aggravated the pollution brought about by the dumping of illegal mixed plastic waste shipments from South Korea on a government land in Tagoloan, Misamis Oriental," EcoWaste Coalition national coordinator Aileen Lucero said.

“We urge concerned law enforcement agencies to leave no stone unturned in the investigation being conducted to bring the culprits to justice,” she added.

The group said the perpetrators should be held liable under the country’s law on arson, as well as Republic Act (RA) 8749, or the Clean Air Act.

The open burning of mixed plastic wastes, mainly comprised of chlorinated compounds, discharges toxic and poisonous fumes that are detrimental to human health and the environment, EcoWaste added.

The group also cited the law's provision that states "no person shall be allowed to burn any materials in any quantities which shall cause the emission of toxic and poisonous fumes."

It also further bans and penalizes any “establishment, firm, company, government or private entity or organizations... to burn or cause open burning of waste materials in their premises, area of jurisdiction, including recognized or unrecognized dumpsites in any quality or quantity.”

To prevent any further untoward incident that may delay the re-export of the South Korean wastes, the EcoWaste Coalition urged law enforcement agencies to ensure that the waste materials are secured 24/7 until these are shipped back to their origin in September 2019.

Another group, Pinoy Aksyon Pinoy Akson for Governance and the Environment (Pinoy Aksyon), also raised concerns about the incident.

"Authorities should seriously look into it. The burning raises more questions: was there due diligence in securing the trash?" asked Bencyrus Ellorin, Pinoy Akson's head in an interview.