August 19 not holiday in Davao City 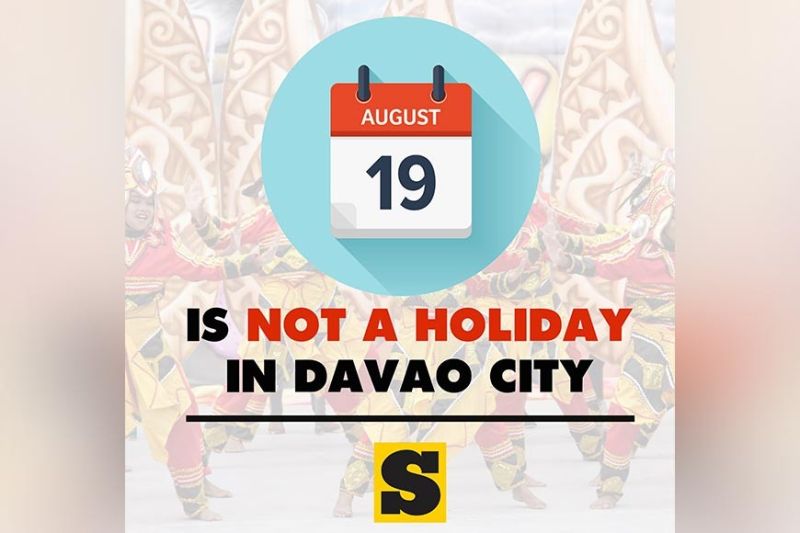 THERE is no Araw ng Pasasalamat holiday on August 19.

The Philippine Information Agency-davao office, which relays formal announcements of holidays, has been receiving calls regarding August 19. Social media postings also have been announcing Aug. 19 as a holiday.

“We have so many holidays already, that is why we have released the Kadayawan schedule so people will be guided,” Tecson said.

The CTOO chief added that Malacañang is no longer allowing another Kadayawan-related holiday due to the number of holidays in August.

August 16 is a Davao City-wide holiday, while there are three national holidays which include; August 12 for Eid al-Adha or the Feast of Sacrifice, Aug. 21 for the Ninoy Aquino Day and Aug. 26 for the National Heroes Day.

Aug. 19 which falls on a Monday would have been the Araw ng Pasasalamat (Thanksgiving Day) occurring a day after the major culminating weekend of Kadayawan where the two main events are held, Indak-Indak sa Kadalanan (Street Dancing Competition) and Pamulak sa Kadayawan (Floral Float Parade). The Monday city-wide holiday was used as a rest day for the city after the frenetic weekend celebration.

However, Tecson said the two main events have been split to two Saturdays (Aug. 17 for Indak-Indak and Aug. 24 for Pamulak) with Aug. 24 as the culminating event highlighted by the Tambayayong Kadayawan (traditional song and dance performances) in the afternoon. (PIA)