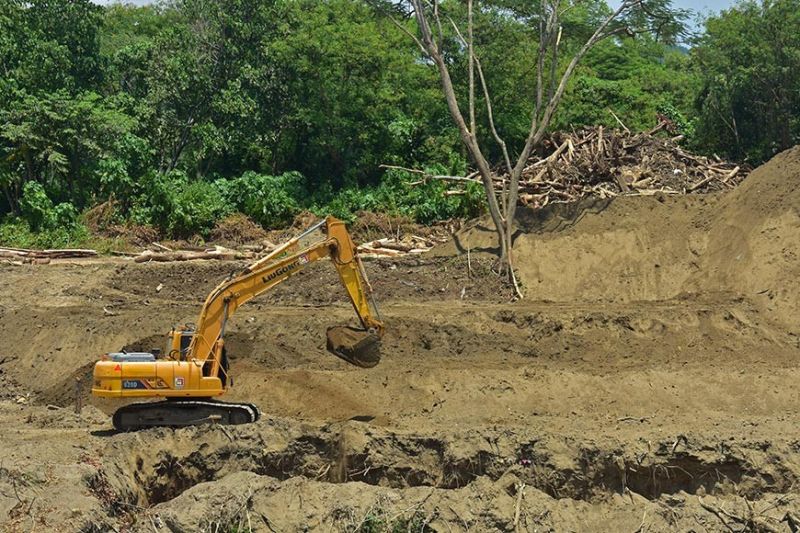 CLEARED. Heavy equipment continues to operate near Davao River in Barangay Ma-a, Davao City yesterday as personnel of the Department of Public Works and Highways work on the construction of the dike in the area. (Photo by Macky Lim)

DESPITE having necessary permits, the Davao City Council committee on environment and natural resources deemed the drainage and revetment project of the Department of Public Works and Highways (DPWH) near Ma-a riverbanks did not undergo proper consultation to the local government.

During the regular session on Tuesday, committee chair Councilor Diosdado Mahipus, Jr. said that although the revetment project complied with the requirements including permit for the cutting of trees from the Department of Environment and Natural Resources (DENR), and certification of no objection from the land owner, he said the project did not pass through the Davao City Infrastructure Monitoring and Advisory Group (IMAG).

IMAG was created by Mayor Sara Duterte in 2017, through an Executive Order No. 32, which aims to ensure successful integration and effective implementation of DPWH and the city government projects.

Mahipus, meanwhile clarified that they are not opposing the project, which is under the Build, Build, Build Program of the Duterte administration.

Days after her speech, Mahipus immediately called for a committee hearing, wherein representatives from the Davao City Environment and Natural Resources Office (Cenro) revealed that the local agency was not consulted prior to the issuance of the DENR permit.

Fuentes said the construction of the revetment project, which covers the whole coverage of the Davao River, is important due to the city's rising water levels.

He said the cutting of trees was "a last resort" due to the lack of equipment for earth balling, a process of moving a tree by digging out the earth and the roots in a circular shape, leaving most of the root system undisturbed and intact.

He said all DPWH project is in consonance with the environmental protection laws and ordinances.

Meanwhile, he said they will replenish the trees that have been cut down by planting additional 50 to 100 seedlings within the area.

He also said the committee ordered them to submit the list of all DPWH projects for monitoring purposes and future coordination.