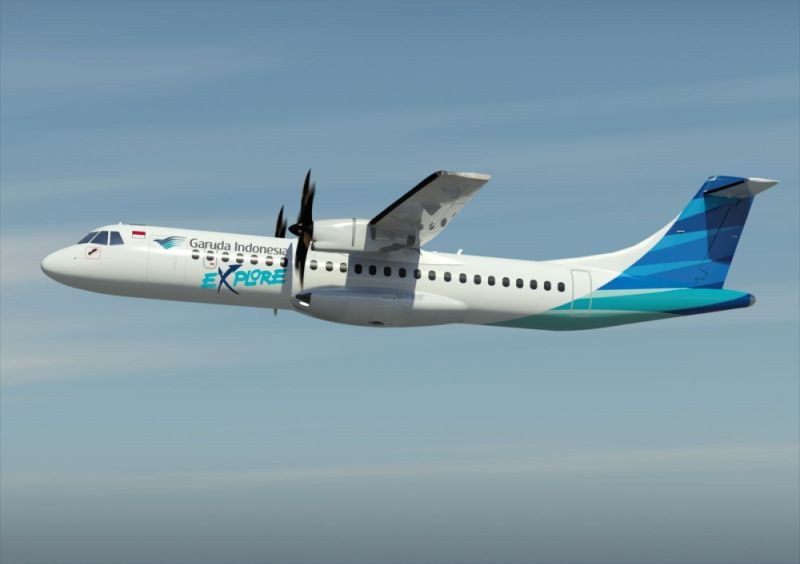 REVIVAL. Garuda Indonesia will be operating the Davao-Manado air link with the 70-seater ATR 72-600. Indonesian Consul-General Dicky Fabrian revealed that the airline will serve the air link by the end of September this year. (ATR photo)

THE Consulate General of Indonesia in Davao City revealed yesterday that Indonesia's national airline will soon revive the Davao-Manado route.

Indonesian Consul General Dicky Fabrian told SunStar Davao yesterday, August 13, 2019, that while there have been various airlines in their country that have expressed interest in the said route, only Garuda Indonesia, the flag carrier of Indonesia, confirmed to operate the route.

“They are very keen to have it as soon as possible. This is a very positive response because the target is already set that at the end of September, the maiden flight serving Davao-Manado will [take place] and there is already approval from the board members of the company,” he said, adding that the company is positive that one month is enough to work things out for the direct flight.

The business community and the Philippine government, through the Mindanao Development Authority, have been pushing for the revival of the flight route for quite some time now.

It was earlier reported in SunStar Davao that Philippine Airlines (PAL) has expressed to operate the Davao-Manado route through its subsidiary, PAL Express. However, there have been no updates as to the plan of the Philippine flag carrier on operating the flight.

Fabrian said Garuda Indonesia will initially operate the route with a 70-seater ATR 72-600. The initial plan is to provide a flight schedule once a week but Fabrian said there is a possibility to add more depending on its passenger volume.

“They will have to see then on how people from Davao and Manado will respond to this. Because again, this is purely business, if they find that the benefit is there then I believe that there will be more than once a week [flight schedule],” he said.

Travel time between Davao City and Manado is estimated to be at one hour and 15 minutes.

The company is now working out on the administrative works like route permits, airport slot, ground handling, contracts, and approval of some of the concerned offices in their country, among others.

Fabrian said connectivity is important for both areas as it will boost not only trade relations, but also tourism, socio-culture, and other areas that will benefit both Davao and Indonesia.

As the Indonesian government focused on promoting and highlighting destinations in their country, Fabrian said this direct flight will contribute to further improve tourism. On the other hand, Indonesian people will be encouraged to visit Davao City.

“Manado can serve as the entry point not only for Davao but for the Philippines to see many places of Indonesia. They can come from Manado to Bali for example, and visit some other destinations. It will be cheaper and will be faster,” he said.

According to an August 8 report by Ilman Sudarwan of Bisnis Sulawesi, an Indonesian news website, the now defunct Bouraq Airlines used to operate the Davao-Manado flights in the 1990s. Wings Air and Sriwijaya Air used to also serve the route but did not prosper.

In the same report, Special Staff of the North Sulawesi Governor for Tourism Dino Gobel said there is a potential market, both in terms of tourism and business, for the Davao-Manado route. He also pointed out that there are "many" Filipino expatriates in Manado.

Meanwhile, Mindanao Development Authority (Minda) Officer-in-Charge Nathaniel Dalumpines said Minda welcomes the move of Garuda Indonesia to serve the Davao-Manado flight as this direct route is expected to boost connectivity between Mindanao and North Sulawesi, as focus areas of BIMP-EAGA.

“The revival of this particular air link also complements the ongoing Davao-Bitung sea connectivity, with business players now able to connect easily and much faster with counterparts in these two areas,” he said.