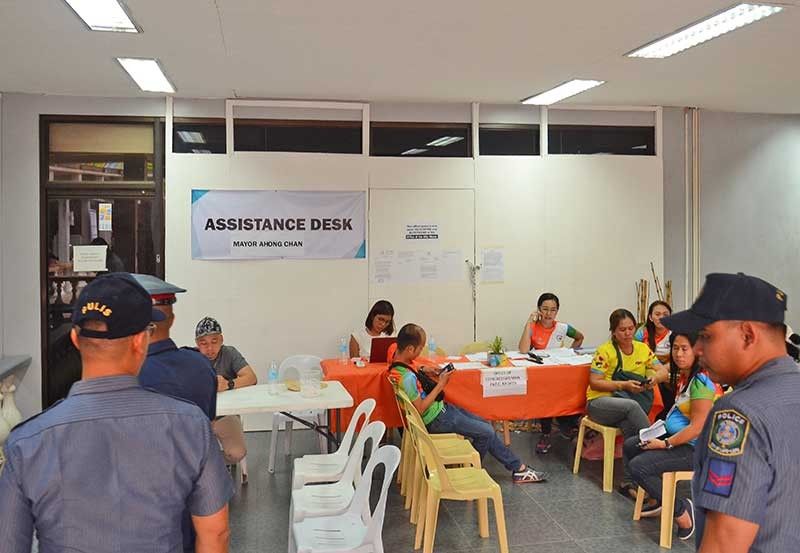 STAFF members of Lapu-Lapu City Rep. Paz Radaza refused to leave their posts at City Hall despite the closure of their office and a standing order for them to vacate the premises.

Even though Radaza’s office was padlocked and sealed off with plywood on orders of Mayor Junard “Ahong” Chan, her staff members continued to work on Tuesday, Aug. 13, 2019. They set up assistance desks outside her office on the second floor of City Hall.

Chan had ordered Radaza to vacate her office after the Department of the Interior and Local Government (DILG) opined that City Ordinance 14-200-2019, which created the office, was deemed “ineffective and invalid” since it was not published in accordance with the Local Government Code.

The DILG said that it’s the mayor, and not the City Council, who has the power to allocate offices at City Hall.

But for lawyer Kim Castro, Radaza’s legal counsel, Chan has no right to forcibly eject them as the DILG opinion cannot invalidate the city ordinance that grants the congresswoman an office at City Hall.

He also denied the DILG’s claim that the ordinance was not published, adding that it came out in two local dailies on July 4, 2019.

Castro also pointed out that there is an unresolved case filed against Radaza and five city officials before the Regional Trial Court to annul City Ordinance 14-200-2019.

“We have the right to hold office here. We have a city ordinance that continues to be valid and there is no court order that says it is invalid,” Castro said.

Radaza’s office in City Hall caters to residents seeking medical assistance, those asking for endorsement for various government programs such as government internship programs, Tulong Pang Hanapbuhay sa Ating Displaced/Disadvantaged Workers of the Department of Labor and Employment and the Technical Education and Skills Development Authority, and educational assistance provided by the Commission on Higher Education.

In a separate interview, Lapu-Lapu City legal officer James Sayson set aside Castro’s statement, adding that the City has not initiated any case against Radaza over her occupancy of the said office.

If an individual filed a case against Radaza, the City had nothing to do with it, Sayson added.

For Sayson, the DILG’s opinion is clear that Radaza’s continued stay at her office at City Hall is illegal and the presence of her staff there will only affect the city’s services and transactions.

“As far as we are concerned, we are trying to resolve everything peacefully and within the bounds of the law,” Sayson said in Cebuano. (from GCM of Superbalita Cebu/JKV)