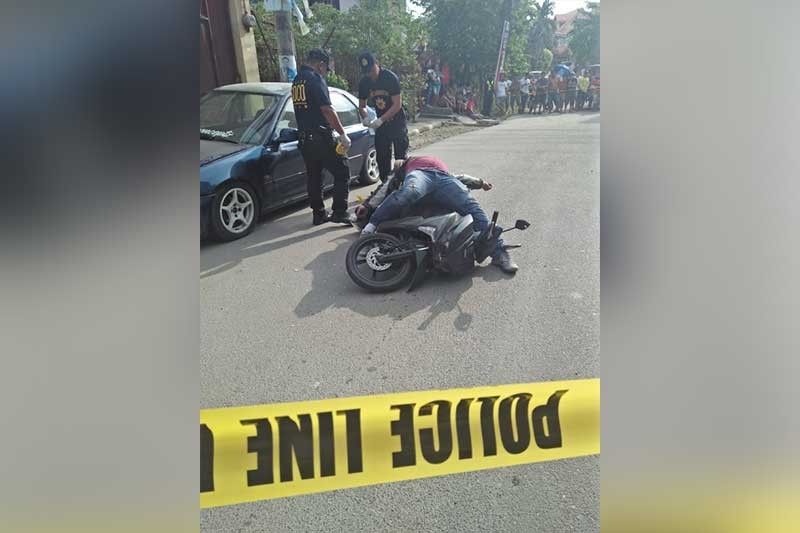 ROBBER. One of the two robbers, later identified from the ID card on him to be PO2 Jobie Antipolo, is shot dead by an unidentified person. (Contributed photo/Jessie Campos)

SOMEONE shot the two scooter-riding men who were robbing a security officer carrying payroll money in broad daylight in Barangay Tisa, Cebu City.

One robber died, lying face up on the scooter he was driving.

The other robber fled with the P300,000 payroll money, using the security officer’s motorcycle to get away. It could not be ascertained if he had been hit or not.

The security officer, who was shot in the body by one of the robbers, is lying critical in a hospital.

The person who shot the robbers is unidentified and, from accounts, could not be traced.

Identified, however, was the dead robber based on the Philippine National Police (PNP) identication card he had on him.

He was PO2 Jobie Antipolo, last assigned with the Sogod Municipal Police in Cebu. PNP records state that he was listed as absent without official leave (Awol) since 2016.

Jessie Campos, a barangay councilor of Tisa, said people in the area had noticed the two men hanging around the neighborhood bakeshop since 11 a.m.

They were apparently waiting for someone as they kept on calling somebody on their mobile phones.

The neighborhood people did not mind the two men until they heard gunshots at 2:30 p.m.

They saw the Deca Homes security officer on the ground, one of the two men lying face up on their scooter, and the other man grabbing Velos’s motorcyle and fleeing.

Velos’s motorcycle has a U-box and in it, Bancoleta said, was payroll money worth P300,000.

Velos still had 24 security officers to be paid their salaries.

Labangon station police chief Bancoleta said his men are checking hospitals for a man with gunshot wounds and for records of the closed-circuit television camera.

As to the person who shot at the robbers, no one had noticed him or her. So they said. (AYB/MPS)