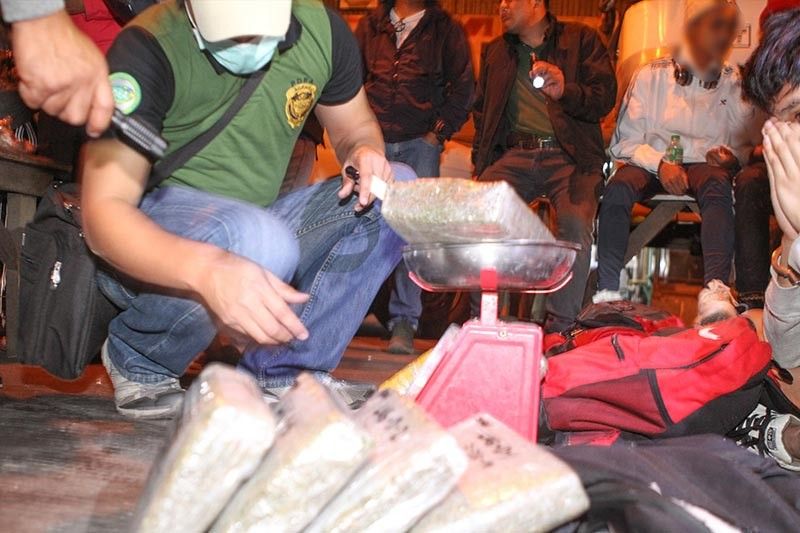 CAMP BADO DANGWA -- Eight individuals including two minors were separately apprehended by the police over the weekend for alleged drug pushing in the different parts of the region.

Christopher Biendima, 21, former drug surrenderer, a tricycle driver, and a resident of Barangay Calaba, Bangued, Abra was arrested at Zone 5, Bangued in the afternoon of August 11 after selling illegal drugs to an operative who acted as buyer.

Confiscated from his possession were one plastic sachet containing suspected suspected “shabu” (methamphetamine hydrochloride), P5,000 marked money, one cellphone, and one motorcycle.

In Baguio City, two suspected female drug pushers were also arrested on August 10 at Purok 7, San Luis Ext. which led to the confiscation of three sachets of suspected shabu, undisclosed amount of cash, and a cellular phone.

Two tubular dried marijuana stalks with leaves and fruiting tops, wrapped in a transparent plastic with dangerous drug board value of P450,000 was confiscated from Alwahid.

Three other drug peddlers were apprehended in Purok 6, Bulanao, Tabuk City, Kalinga identified as Rogelio Paot, 42, and a resident of Barangay Bugnay, Tinglayan, together with two high school minor students.

Seized from their possessions were 25 pieces of 60ml bottles containing marijuana oil, drug bust boodle money, one cal. 45 Armscor pistol bearing SN 113847 with one magazine loaded with seven ammunition, one motorcycle, and one unit cellphone.

Benros Johil Saldua Medrano, 21, criminology student and a resident of Cabildatan, Zone 7, Bangued, Abra was arrested in the afternoon of August 9 at Linasin, Zone 1, Bangued.