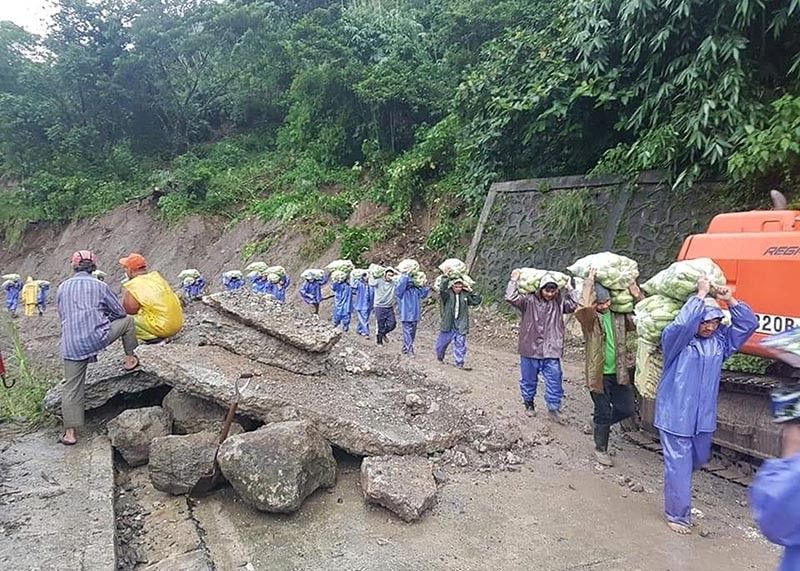 KAPANGAN. Porters carry assorted vegetables after a portion of the Gov. Bado Dangwa National Road along Gambang Cuba, Kapangan was closed due to landslide brought about by the Southwest Monsoon (Habagat) and typhoon Hanna that saturated the terrain to cause slippage. (Photo by Mayor Manny Fermin/Kapangan) 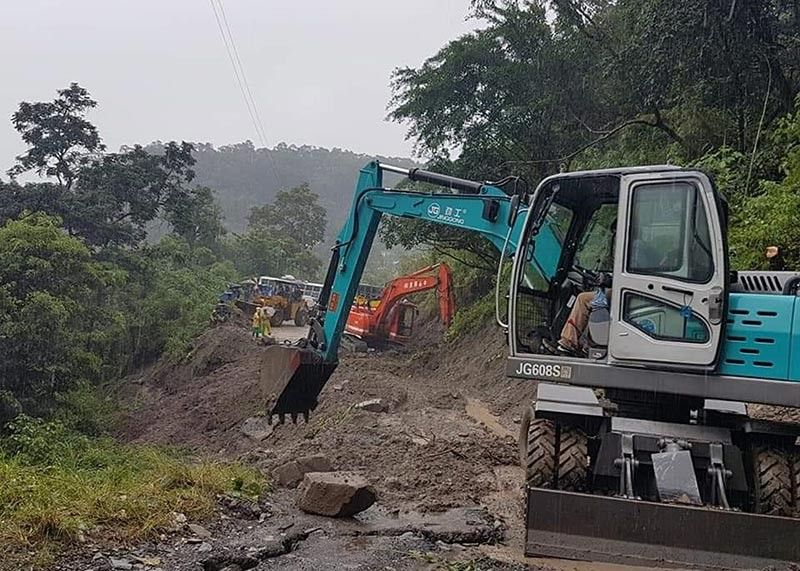 KAPANGAN. Heavy equipments from DPWH and private contractors provide clearing operations along the damaged portion of Gov.Bado Dangwa National Road in Gambang Cuba, Kapangan due to landslide brought about by the Southwestern Monsoon (Habagat) and typhoon Hanna that saturated the terrain to cause slippage. (Photo by Mayor Manny Fermin/Kapangan)

AT LEAST 11 families in Baguio City were evacuated while several roads in other parts of the Cordillera region were closed due to the prevailing Southwest Monsoon as rainfall accumulation has reached 310.6 millimeter.

In a report by the Baguio City Disaster Risk Reduction and Management Office (CDRRMO) from August 4 to 14, there were 39 individuals rescued and assisted due to fainting, accidental road slip, fallen into a manhole, mauling and others in emergency health situation.

CDRRMO reported the 11 families composed of 33 individuals were evacuated from their homes due to soil erosion including trees about to fall over affecting their houses.

In nearby Benguet Province, Ambucalo and Binga dams started spilling operations on August 13 before it reaches critical levels.

Ambuklao Dam opened eight gates at four meters each as it reaches 751.97 meters while Binga Dam opens six gates at 3.5 meters as it reaches 574.43 meters.

Ambukalo’s critical level is 753 meters while Binga is at 575.

Cordillera Regional Disaster Risk Reduction Management Council advised public and residents along and near Agno river waterways in Bokod, Buguias and Kabayan to be on full alert.

Classes for preschool to senior high school for private and public schools on August 14 was suspended due to the weather affecting the province.

Weather outlook from Pagasa shows Cordillera region will continue to have cloudy skies with scattered rain showers and thunderstorms due to the Habagat.

In Kapangan, Mayor Manny Fermin said the Gov. Bado Dangwa Road along Gambang Cuba is closed due to landslide which poses challenge in the delivery of goods.

Other roads in the city closed were Governor Pack Road near BGH Rotunda due to scoured and hanging footing of arc and the Longlong Road due to landslide.

The Office of the Civil Defense in the Cordillera meanwhile said tourism activities in Mt, Pulag, Mt. Purgatory in Bokod, Benguet, caving tours in Sagada in Mountain Province, and swimming at Ar-arbis Falls and Lusuac Springs Resort in Lagayan, Abra are suspended. (With a report from Roderick Osis)