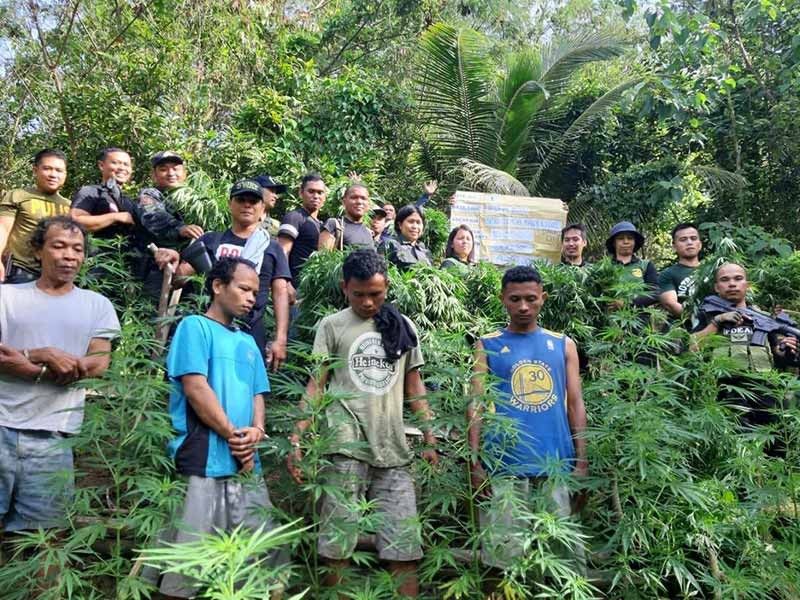 SOME P22.4 million worth of shabu and marijuana plants were seized in separate operations in Cebu City and Cebu Province on Tuesday, Aug. 13, 2019.

In Danao City, six persons were nabbed while some P14.3 million worth of marijuana stalks were uprooted in two simultaneous drug operations in Barangays Langosig and Licos on Aug. 13.

The operation led to the arrest of Benjie Depositario, Inocentes Depositario, Bertin Depositario and Melvin Depositario. They were identified as the cultivators of the plantation and are listed as high value targets.

Bertin yielded a .45 calibre pistol and a magazine with seven live ammunition.

At 8 a.m. another team led by Police Lt. Col. Rene Kyamco of 1st PMFC, arrested two other alleged marijuana planters in Barangay Langosig, Danao City. They were identified as Jay and Jhosar Acidillo and are both considered high-value targets.

However, two other suspects, identified as Genesis Jaime and Wendel Jaime, eluded arrest and are subject of a manhunt operation. The operation in Langosig led to the destruction of around 25,000 fully grown marijuana worth P10 million.

On the other hand, Cebu City Police Office (CCPO) Director Gemma Vinluan said since Aug. 1, they have confiscated around P14 million worth of suspected shabu.

On Aug. 13, some P8.1 million worth of suspected shabu was seized in a drug bust in Barangay Kalunasan, Cebu City. (WBS)