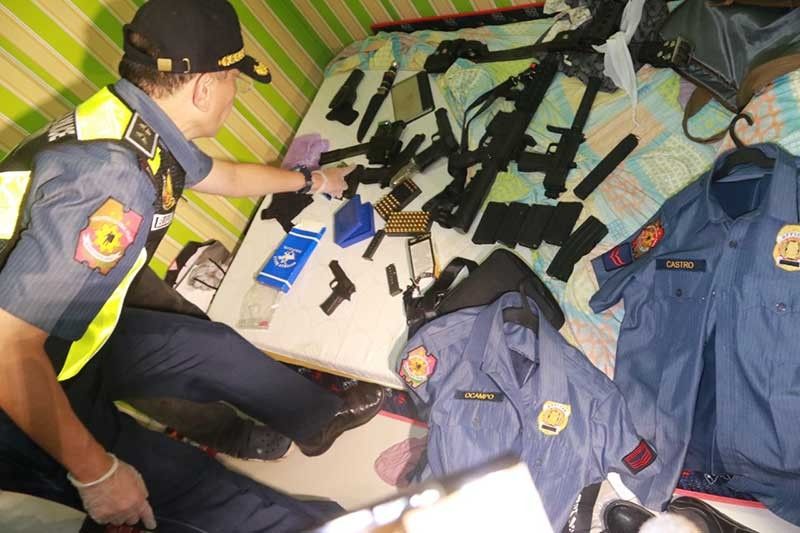 MANILA. National Capital Region Police Office Director Guillermo Eleazar inspects the illegal firearms, ammunition and some police uniforms found in a raid on the residence of a kidnap-for-ransom suspect on August 15, 2019. (Contributed Photo) 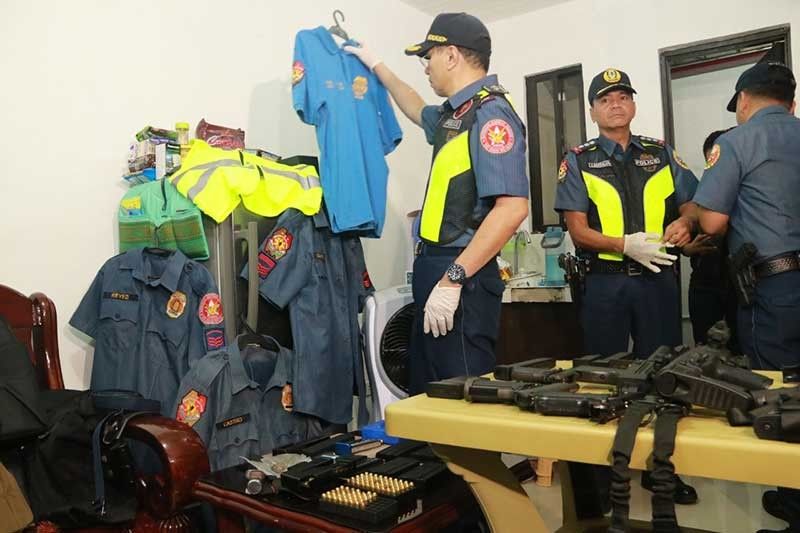 MANILA. National Capital Region Police Office Director Guillermo Eleazar inspects the illegal firearms, ammunition and some police uniforms found in a raid on the residence of a kidnap-for-ransom suspect on August 15, 2019. (Contributed Photo)

A SUSPECTED member of a kidnapping syndicate linked to the kidnap-for-ransom of several Bureau of Internal Revenue (BIR) officials was killed while three others were arrested in simultaneous police operations Thursday, August 15.

The National Capital Region Police Office (NCRPO) identified the slain suspect as Leo dela Fuente, 41, one of the targets of the five search warrants issued by the Quezon City Regional Trial Court against the alleged members of the groups residing in several areas in Caloocan City as well as in Marilao and San Jose del Monte in Bulacan.

NCRPO Chief Guillermo Eleazar said Dela Fuente was among the “main players” of the group who is involved in the actual kidnapping although he was not identified in the warrants.

Personnel from the NCRPO in coordination with the Central Luzon police regional office, Highway Patrol Group and Anti-Kidnapping group conducted the simultaneous implementation of the search warrants for illegal firearms and explosives on Thursday morning, August 15.

Eleazar said Dela Fuente fought it out with the police after they raided a residence in Barangay Loma de Gato in Marilao, Bulacan.

The house is allegedly owned by Joever Garcia, who is among the target of the warrants.

The other targets were identified as Romeo Manalastas and Lloyd Antonio. They were not in the area during the raid.

Garcia eluded arrest although his wife and two children were arrested, but have denied involvement on any illegal activities.

Various firearms, ammunitions and explosives and several vehicles which were allegedly being used in the group’s illegal activities were recovered during the raid.

Eleazar said they have been conducting case build-up against the group for at least a year already after receiving reports on the alleged kidnapping of several BIR officials.

He said the Philippine National Police (PNP) has yet to receive any formal complaint from the BIR officials who were victimized by the group supposedly out of fear but they received intelligence information about it.

Eleazar said that with the pieces of evidences gathered in the raid, they will conduct an in depth investigation on the group's possible involvement in other illegal activities.

He said they will also look into the possibility that policemen in active service, and former officers or members of the military were in cahoots with the suspects particularly in its kidnap-for-ransom activities. (SunStar Philippines)