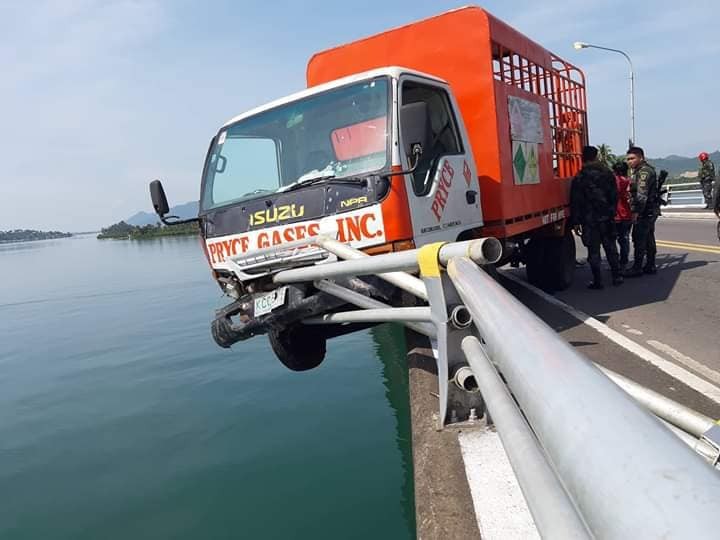 A COMPANY-OWNED vehicle almost falls off the iconic San Juanico Bridge, which is connecting Leyte and Samar Island, on Thursday, August 15, 2019.

Authorities said the incident happened at 9:03 a.m. along the strait of San Juanico Bidge in Barangay San Juan, Sta. Rita, Samar. Involved in the incident was an Isuzu canopy truck that was carrying liquefied petroleum gas (LPG) or cooking gas.

The driver was identified as Arnold Bado, 27, from Tacloban City.

Initial investigation showed the vehicle was traversing the strait of San Juanico Bridge from Tacloban to Samar when the steering wheel handle suddenly detached from its place.

The driver immediately applied brakes but lost control of the vehicle.

As a result, the truck turned right and subsequently bumped into the bridge railings while the front right tire fell off the bridge.

The vehicle incurred damage, while the driver was unharmed.

Personnel from the Department of Public Works and Highways were retrieving the vehicle from the bridge Thursday, August 15.

In June 2013, a six-wheeler truck carrying construction materials lost its brakes and fell off the San Juanico Bridge, killing its driver.