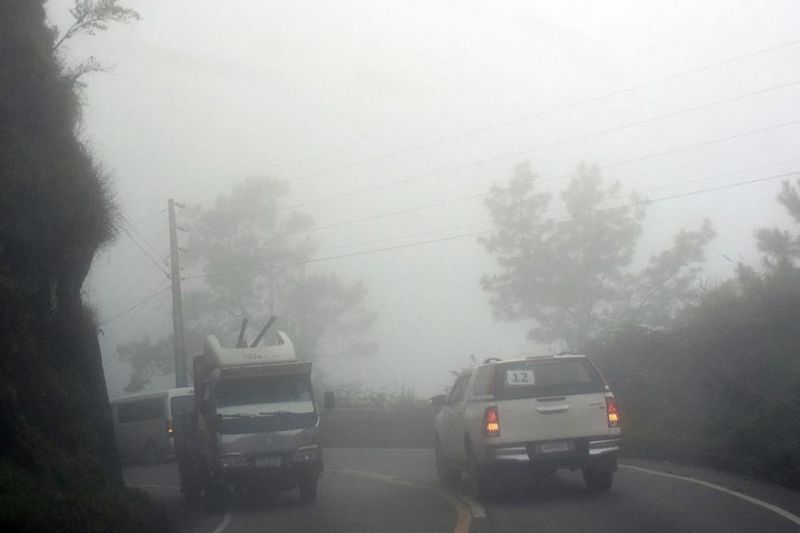 BAGUIO. Drivers give way to fellow motorists along the Halsema Highway, which is often covered in thick fog. Motorists are advised to take extra precaution when traversing roads particularly in the Cordillera which is frequently at zero visibility, especially during rainy weather. (Redjie Melvic Cawis)

BAGUIO City has experienced 300 millimeters of rainfall in two days due to the southwest monsoon or habagat, according to the City Disaster Risk Reduction and Management Office (CDRRMO).

Despite the increase in rainfall, CDRRMO Officer Julius Santos said the City Camp lagoon was spared from flooding.

"We have our flood early warning station installed (in City Camp) which we can activate anytime. Once we monitor that the flood water is increasing if we have strong rains, we trigger this to activate its siren, which has an audio alarm and visual light for residents to be alert and for them to know when to start evacuation," Santos said.

The CDRRMO was activated since August 4 to monitor the effects of the monsoon rains experienced in the city.

"So far, we have not recorded any major incidents in Baguio City. We have given appropriate action to reports forwarded to our office which consisted of fallen trees, trees about to fall and soil erosions," Santos added.

Quoting Pagasa, Albert Mogol, Office of Civil Defense-Cordillera director and chairman of the regional DRRM council, said from 8 a.m. of August 3 until 8 a.m. of August 13, a total of 648.8mm was recorded from the continuous rain due to weather disturbances like habagat and Typhoon Hanna.

In August 2018, Baguio and Benguet experienced over 1,600mm of rainfall due to the southwest monsoon that persisted for months.

On September 16 at the height of Typhoon Ompong, 760mm rainfall was recorded, triggering a massive landslide in a mining village in Itogon, Benguet, some 20 kilometers away from Baguio City, and leaving around a hundred people dead.

Almost all areas of Itogon have been declared highly susceptible to landslide by the Mines and Geosciences Bureau.

Mogol warned residents of the possibility of landslides due to drenched and soaked soil caused by continuous rains in the region.

Residents living at the foot of the mountains and on slopes are advised to be on alert for any signs of movements of the soil and cracks, and initiate pre-emptive evacuation and avoid accidents if possible. (With PNA)