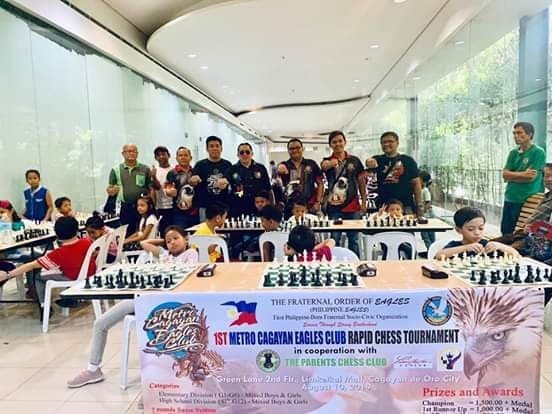 Mary Stephanie Dacut of West City Central School and Makainah Rosette Anteri Romulo were tied at 5.5 points each to settle at fourth and fifth slots in the day-long rapid chessfest that attracted around 60 players in elementary division.

The Corpus Christi pawnpushers lorded it over in high school skirmishes with Euniel Grant Capilitan and David Rey Ancheta scoring 6.5 and 6 points, respectively, to bag the P1,500 first prize and P1,000 runner-up prize for Grade 7-12, mixed boys and girls.

Bankrolled by the Metro Cagayan Eagles Club, the pre-fiesta Parents Chess Club tournament also had special awards given to the top 3 players belonging to the under 10 and under 8 age brackets.