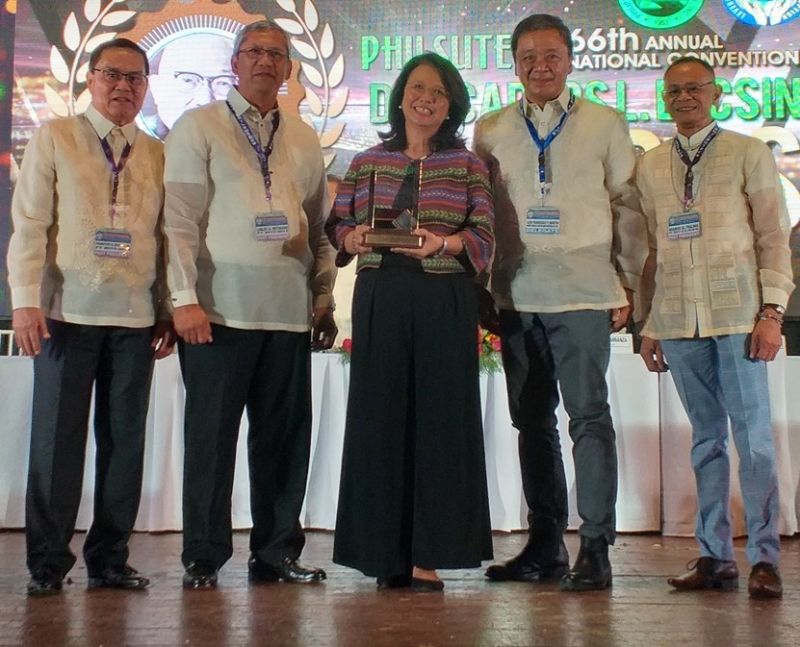 FORMER Sugar Regulatory Administrator (SRA) Ma. Regina B. Martin was conferred the Don Carlos Locsin (DCL) Award, the highest award in the sugar industry, in recognition of her outstanding achievements as former SRA chief and for working tirelessly and fearlessly for the protection and promotion of the sugarcane industry.

The award was presented to Martin by the Philippine Sugar Technologists Association (Philsutech) during the opening of the 66th Philsutech Annual National Convention last August 14 at the Waterfront Hotel, Lahug, Cebu City.

Named in honor of Don Carlos L. Locsin, the co-founder and first president of Philsutech, the award was started in FY 1991-92. It is conferred on persons who have distinguished themselves through outstanding achievements and significant contributions towards the promotion of the interest and welfare of the sugar industry.

Martin made history as the first woman Administrator of the SRA from 2010 to 2016. She was thrust into the epicenter of the sugar industry during the years when the industry faced the Asean trade integration.

She was the main catalyst in the passage of the Sugarcane Industry Development Act (Sida) of 2015, a law which strengthened the industry and made it better prepared to face the challenges of trade liberalization.

She tirelessly attended the numerous congressional hearings on the proposed law. Her comprehensive knowledge and contagious passion for the industry, combined with her innate wit and charm, convinced lawmakers to pass this landmark legislation which benefits all sugarcane industry stakeholders. She also led the consultations in the drafting of the SIDA Implementing Rules and Regulations.

In partnership with the Department of Agrarian Reform, she organized the lands of agrarian reform beneficiaries into block farms, which has been institutionalized with the necessary financial and technical support in the Sida. Under the law, block farms were entitled to 15 percent of the annual P2 billion Sida-mandated allocation.

Martin also holds the distinction of being the first woman to chair the International Sugar Organization Conference in London in 2014. She was also a plenary presenter in the 24th ISO Seminar in November 2015, the second consecutive year that she gave a presentation in the prestigious organization’s council session.

She spearheaded the sugar industry’s annual Sugar Mission to Washington D.C. from 2010-2016. These trips, where Philippine sugar industry leaders meet with US lawmakers and executive officials, are aimed to maintain the country’s access to the US sugar market.

In one of those trips in 2011, she candidly admitted to US Department of Labor officials that child labor exists in the Philippine sugar industry. Her candor paved the way for the US government to provide a US$15 million fund for programs to eradicate child labor in the sugarcane farms.

This US$15 million fund supported the ABK3 LEAP Project implemented by the World Vision Development Foundation, which targeted 52,000 children and 25,000 households within a four-year period, by providing direct education and education support services for children 7-15 years old, sustainable livelihood to parents and families, as well as youth employment and other social services.

In September 2014, she led the Philippine delegation to the 3rd Philippine-Brazil Bilateral Consultation Meeting, where they worked out an exchange program for the acquisition of Brazilian sugarcane varieties that are suitable for Philippine farms.

She also headed the country’s delegation in the World Sugar Expo 2015 in Bangkok, Thailand, where foreign participants were impressed with the gains made by the Philippine sugar industry and expressed their interest to work with the Philippines.

Her stint at the SRA marked the period when raw sugar production reached 2.46 million metric tons in Crop Year 2013-2014, the highest in recent memory.

Many industry stakeholders are also quick to point out that, during her term, the composite prices of sugar hovered in the neighborhood of P1,500 per bag and were favorable to sugarcane farmers.