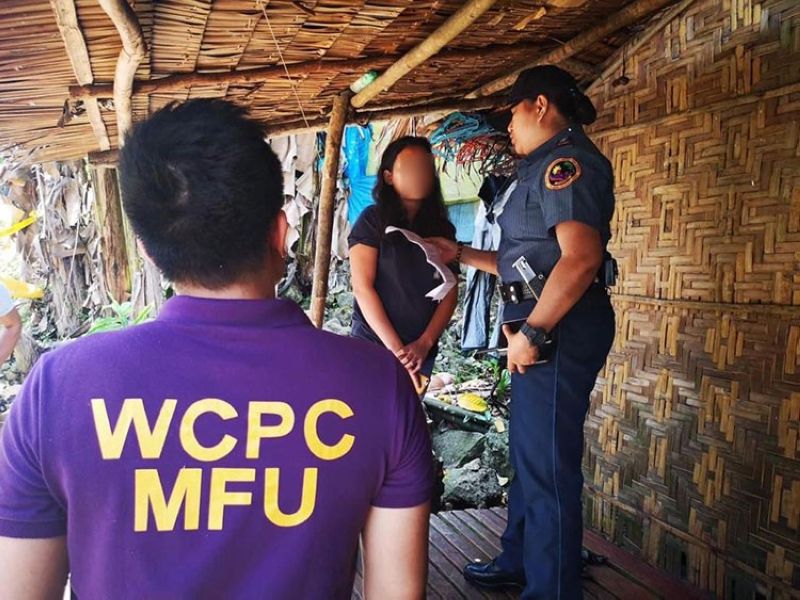 Operatives from the Women and Children Protection Center–Mindanao Field Unit (WCPC-MFU) rescued the suspects’ sisters aged 13 and 15 and her four-year-old daughter from their home in Barobo, Surigao del Sur past 11 a.m. Friday, August 16, 2019.

Although not identified as a victim yet, the suspect’s other daughter, one year old, was also taken into protective custody because she is considered a child at risk.

The suspect’s name is withheld to keep the identity of her sisters and children confidential.

The WCPC-MFU was granted a warrant by Judge Retrina Fuentes of Davao City, Davao del Sur Regional Trial Court Branch 10 to search the suspect’s electronic devices for evidence of online sexual exploitation of children (Osec). Forensic examination of her electronic devices is ongoing as of this writing.

The investigation began in February this year after the WCPC-MFU received information about the suspect’s illegal online activities from a confidential source.

The WCPC is a specialized and dedicated anti-trafficking unit within the Philippine National Police.

During online surveillance, investigators learned that the suspect offered to sexually abuse her sisters and daughter and stream live the abuse in exchange for money from online predators.

The victims are now in the custody of the Department of Social Welfare and Development (DSWD). The suspect will be charged with violation of the Anti-Trafficking in Persons Act or Republic Act 9208 (as amended by RA 10364), among other violations.

“Today's successful operation is another testament to our commitment to lock up people who exploit our children online and to bring rescue to their victims. The WCPC, our partner law enforcement units, and the entire criminal justice system will be relentless in our effort to end online sexual exploitation of children in the Philippines. To those who are doing this crime or have plans to do it for easy money, you cannot hide. We

know how to get you,” said Colonel Christine Tan, chief of WCPC-MFU.

DSWD-Caraga Director Mita Chuchi Gupana-Lim said: “When it is a family member or someone close to these children who are perpetrators, we need to step up and be there to provide all the help that they can get. It is sad that there are these instances, where the people you trust place you in harm’s way. Regardless of the circumstances, children should never be placed in a situation where they are vulnerable to abuses -- worse, situations where their innocence is jeopardized. Poverty is never an excuse to put children in harm’s way. They should never be collateral or payment to any favors. There is always another way to survive. Putting these children in danger is unacceptable no matter the reason, no matter the situation.”

“Some blame Osec on poverty. Yet millions of poor Filipinos work hard -- sometimes two jobs -- to earn an honest living without sexually abusing children online. While Osec offenders are often motivated by the desire for a lot of 'easy money,' it is a weak excuse to blame Osec on poverty. Filipino children deserve better,” he said.

Tanagho commended the WCPC, the Anti-Cybercrime Group, and the DSWD “for their relentless fight to rescue and protect vulnerable children from (Osec).”

“Osec severely harms children emotionally, causing them to suffer trauma. IJM urges community members to immediately report cases of suspected Osec to authorities so that young children are not abused for another day,” he added.

Osec is a crime that violates the Anti-Trafficking in Persons Act or Republic Act (RA) 9208 (as amended by RA 10364), which comes with a maximum penalty of life imprisonment and a fine of P2 million to P5 million.