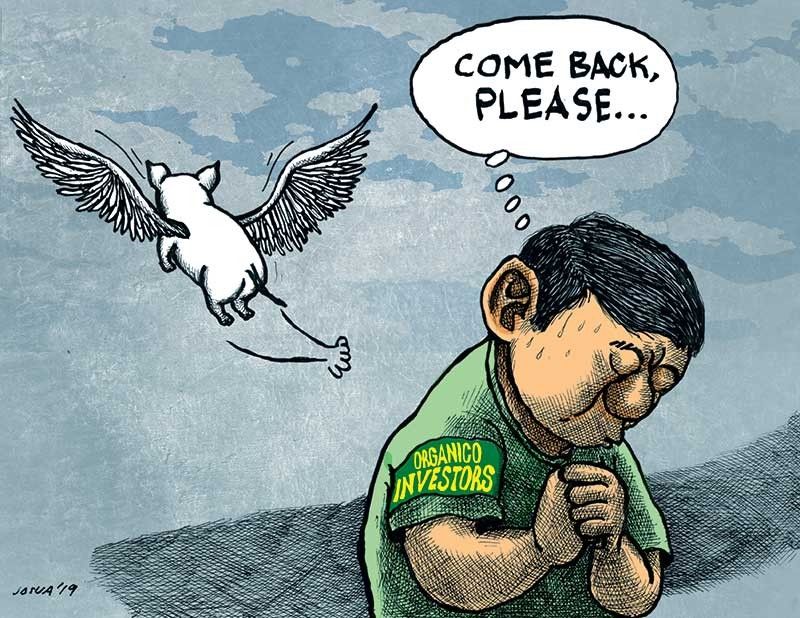 IT’S no surprise that some investors of Organico Agribusiness Ventures Corp. have not given up. They remain optimistic they will get their money back.

After all, these are the very same people, who, despite knowing the risks, gambled their hard-earned money on a scheme that promised exorbitant returns.

The Securities and Exchange Commission (SEC) lists three common red flags to look out for to spot investment scams.

For one, it cautions investors to be wary of claims of “incredible gains” or “huge upside almost no risk” investments. As it reminded the public, if something sounds too good to be true, then it probably is.

In Organico’s case, it enticed investors to purchase a minimum of 10 shares, with each share costing P1,800. For every share, investors would then get P450 every 15 days, or a total of P2,700 in three months.

And so people like Marlon, an investor who did not give his real name, sunk in P300,000 of his savings into the venture. His promised payout, which was last July 3, 2019, did not materialize, but it did not stop Marlon from hoping after he learned that others had gotten their money back, albeit without the interest.

“Secretly, the agents or buyers were being contacted to ask for their bank account details so they could be paid through direct deposits to their accounts. Once the deposit is made, they call back to confirm. So far, I know of some who sent screen shots of their online accounts showing the deposits made,” Marlon said.

And yet, it doesn’t change the fact that he is still waiting for his manna from Organico.

When the SEC got wind of the news, it announced that it had no objections to the company returning the money of its investors.

As a SEC official pointed out, no case has been filed against Organico nor is there an order freezing its assets.

However, Oliver Leonardo, assistant director of the SEC’s Enforcement and Investor Protection Department, did not share the others’ optimism, doubting Organico could even deliver its promised payout.

Just recently, six persons went to the Anti-Cybercrime Group 7 after they were victimized by “double-your-money schemes” on social media.

One of them admitted that she had been victimized by an investment scheme before, which was why she wanted to recover the money she had lost by investing what was left of her capital in another scheme.